We usually talk about the Industrial Revolution as a single event that transformed human lives and history. Starting in the late 18th century, advances in science and technology improved people’s standard of living, altered the environment, decreased the death rate and paved the way for rapid population growth.

Industrial Revolutions of the Past

However, according to some experts, that Industrial Revolution was just the first of four such events that have shaped the world in similarly enormous ways. The Second Industrial Revolution occurred with the advent of the assembly line and the transition from steam to electric power about a century ago. The Third Industrial Revolution was the arrival of the personal computer and the internet. We’re currently teetering on the brink of the Fourth Industrial Revolution (or “4IR” as it’s often abbreviated). Integration of physical and digital systems, as well as advances in artificial intelligence and machine learning, will constitute our next world-shifting revolution. 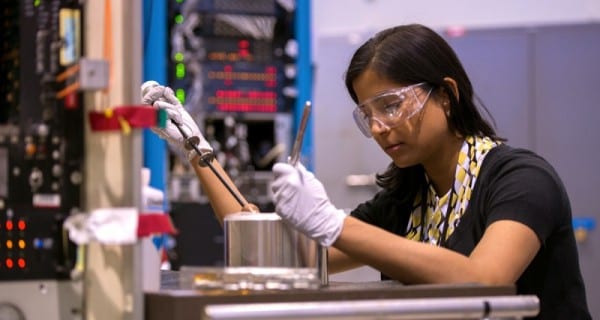 We’re already seeing the impacts of 4IR in every aspect of our lives, most noticeably in the workforce.

Jobs are rapidly being lost to automation, leaving more and more people without opportunities to work in their chosen fields or the skills to enter another. By some estimates, up to 47% of American jobs are at risk of being lost to automation. For example, in the United States, coal mining is no longer a robust industry employing hundreds of thousands of people; instead, self-driving trucks are being programmed to autonomously extract the resource with greater efficiency.  Globally, this is an even more pressing issue. A 2016 United Nations study found that “sewbots” could soon replace up to 80% of garment factory jobs in Asia, most of which are already low-paying jobs in economies where other options are limited.

How Will Women Fit into 4IR?

So where does International Women’s Day come into all this? As with past Industrial Revolutions, 4IR has the power to improve lives, health, safety, and connectedness for everyone. However, women are disproportionately likely to be doing the kinds of unskilled labor that is being automated. With the above example of the garment industry, the vast majority of the 9 million losing their jobs to “sewbots” will be women. And in developed countries where engineering and technology careers are expected to grow and benefit most from 4IR, women are underrepresented. In the United States, women comprise just 35% of undergraduates earning degrees in STEM. And even within that minority, census data shows only one in seven women who have a STEM degree are actually employed in that field.

A Revolution For All

To capitalize on the potential of 4IR for all people, we need to be proactive. Simply training women for new jobs won’t be enough. As a global society, we have to tackle the root causes of gender inequity. We’ll need to address the literacy gap (about two-thirds of the world’s 175 million illiterate young people are female) and break down the many varied barriers that keep girls out of school, whether it’s the threat of sexual violence on their commutes or lack of adequate menstrual supplies. Women must be allowed to participate fully in the workforce, and not just in the kinds of jobs that a computer could do in their stead. This means taking on the obvious challenges, like closing the gender pay gap and rooting out sexism and harassment in workplace cultures, particularly in fields that are currently male-dominated. It also means considering the impact of policies like paid family leave, as taking time off to start a family disproportionately impacts women’s careers over men’s. Finally, access to birth control and the right to make decisions about their bodies and their family sizes will allow women more agency over their lives, including their careers.

We must continue to strive so that everyone—not just one half of our global population– will reap the benefits of the Fourth Industrial Revolution.

Image credits: Woman in lab photo is a U.S. government work from the Department of Energy