PopEd is the only national education program focused on human population growth.

Population Education, a program of Population Connection, provides K-12 teachers with innovative, hands-on lesson plans and professional development to teach about human population growth and its effects on the environment and human well-being. 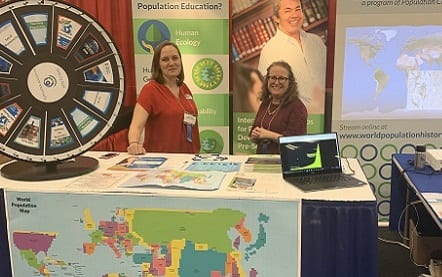 Population Education is all about people – how many of us there are, how we shape the world, and how we interact with each other. And as the go-to program providing innovative lesson plans and professional development on human population growth and its effects, Population Education supports K-12 teachers across content areas.

Our human population has grown from 1 billion to 8 billion in just over 200 years and is expected to grow through this century, so it is critical to examine human impacts on wildlife, climate and natural resources, while working toward equality and justice for the world’s people.

Established in 1975, the program has earned a reputation for educational excellence. Through memorable, standards-aligned classroom activities like simulations, cooperative challenges, and debate, Population Education inspires students to tackle a variety of real-world problems and to become positively engaged in their communities as the next generation of leaders and policy makers. Population Education’s top-notch facilitators train over 12,000 educators annually in North America through interactive workshops

Population Connection (formerly ZPG), founded in 1968, is the largest grassroots population organization in the United States with 500,000 members, supporters and participating educators. The organization aims to educate young people and advocate progressive action to stabilize world population at a level that can be sustained by Earth’s resources. More information about Population Connection can be found at www.popconnect.org.

Population Education, as a part of Population Connection, is committed to the principles of Diversity, Equity, Inclusion, and Justice (DEIJ), since they are fundamental to our work. Read our DEIJ Commitment Statement, Definitions, and Strategic Pillars.

Lessons cover the history and projections of global population growth,…

Interdisciplinary lessons that help elementary students connect themselves, all living…