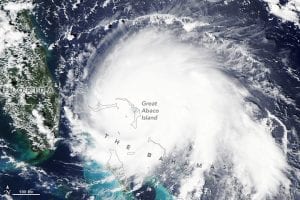 Many of us watched the weather satellite images with horror as Hurricane Dorian churned through the Atlantic earlier this month, leaving destruction in its wake. For many residents of the Bahamas, it was cataclysmic – record-setting winds and flooding from this Category 5 storm destroyed most of the buildings on Abaco and Grand Bahama Islands, displacing some 76,000 people. Weeks later, many remain missing, the death toll continues to rise and these islands are essentially uninhabitable. Even before this disaster, over 7 million people around the world had already been displaced this year because of weather-related disasters.

When we consider the “push” factors of migration, we often think of civil strife, violence and persecution. Yet, in 2018, two-thirds of all internal displacements (people forced to move from one area of their country to another) came about from natural disasters. According to the Internal Displacement Monitoring Centre (IDMC), 265.3 million people were displaced internally from 2008 to 2018 in response to natural disasters. The IDMC says that 2019 is already on pace to be one of the most disastrous years in recent memory.

Weather-Related Disasters on the Rise

While some natural disasters are caused by geophysical changes (e.g. earthquakes and volcano eruptions), the vast majority are weather-related. In 2018, over 16 million people had to leave their homes due to hurricanes, cyclones, typhoons, floods, wildfires, landslides and droughts. So far this year, the biggest displacements of people from disasters have resulted from Cyclone Idai (617,000 displaced in Mozambique, Malawi, Zimbabwe and Madagascar), Cyclone Vayu in India (289,000 displaced), flooding across Iran (displacing 500,000) and floods and landslides in the Philippines (displacing 299,000). 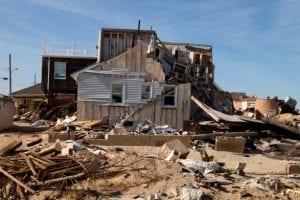 Many of these weather disasters are related to our changing global climate and are made worse by population growth. Take hurricanes, for example. Though it’s not clear whether climate change creates more hurricanes, it is clear that the intensity of hurricanes has changed – there are now more Category 4 and 5 storms, and models project many more to come (a 45-87% increase in these monster storms according to the Center for Climate and Energy Solutions). This is because warmer ocean temperatures intensify the impacts of hurricanes, and higher sea level rise amplifies storm surges. Eight of the 10 costliest hurricanes on record have occurred since 2004. An important driver of these high costs is the growth of population and development in coastal areas.

Where Do These Migrants Go?

So where do all of these displaced people go, and for how long? According to IDMC, of the 68.5 million people in the world who are currently displaced from their homes (for disasters and conflicts), about 40 million have migrated to another part of their own countries, and look to their own governments to help them resettle and meet their needs. When Hurricane Katrina hit the Gulf Coast region in 2005, it displaced more than 1 million people. Most eventually returned to their homes, but not all. According to the U.S. Census Bureau, pre-Katrina New Orleans had a population of over 455 million people. That population fell to less than half (209 million) in the aftermath of the hurricane. Seven years later, in 2012, it had risen to 370 million people, about 80 percent of its pre-hurricane population. Those least likely to return were those who didn’t have the means to rebuild in New Orleans or who had lost their low-income housing. Today’s New Orleans is gentrifying, with higher-income neighborhoods being built faster than lower-income ones.

A more recent example is Puerto Rico, where another Category 5 storm, Hurricane Maria, struck two years ago, causing extensive damage to buildings and infrastructure on the island. From October 2017 until February 2018, about 6 percent of Puerto Rico’s population left, but then returned once conditions had improved. Another 6 percent left the island for the mainland U.S. and have stayed. In the Orlando area, where many Puerto Ricans have resettled, their migration is reshaping schools, communities and public services.

In some instances, people displaced from natural disasters seek a new life in another country, especially one that may be better equipped to meet their needs for shelter, jobs, schools, and healthcare. Following the 2010 earthquake in Haiti, 60,000 Haitians moved to the United States under Temporary Protected Status (TPS) a designation for victims of disasters and conflicts to enable them to live and work in the U.S. until it is deemed safe for them to return to their home countries. Bahamians seeking to come to U.S. in recent weeks have been denied entry under TPS. As a result, many of Dorian’s victims headed to the Bahamian capital of Nassau, which is now stretched thin to accommodate the thousands of hurricane refugees.

How to Teach About Climate Migration

Population Education’s activity Carbon Crunch explores the relative vulnerability of different countries to climate change impacts, including extreme weather events. We are also addressing the issues of change vulnerability and resiliency as one of the themes of this year’s World of 7 Billion student video contest, open to students in grades 6-12. 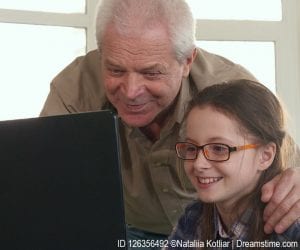 By interviewing adults they know, students learn about diverse backgrounds and consider reasons why people migrate from one place... Read More »