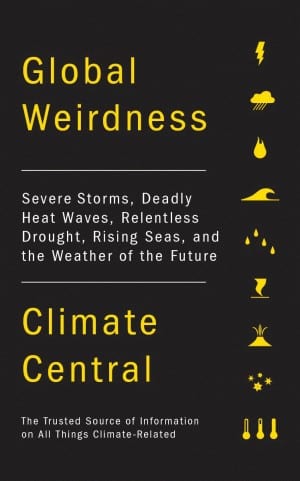 There’s a lot of information out there on climate change and global warming, which is great, but sometimes it can be overwhelming especially if you just want to get a general layout of the issues.

But luckily, Global Weirdness: Severe Storms, Deadly Heat Waves, Relentless Drought, Rising Seas, and the Weather of the Future is able to provide that more accessible overview. From Climate Central, a nonprofit organization dedicated to researching and reporting on climate change, the book sets out to explain, in layman’s terms, what climate scientists knew and agreed upon in 2012 when the book was published. The authors, Emily Elert and Michael D. Lemonick of Climate Central, state that the goal of the book is, “to lay out the current state of knowledge about climate change, with explanations of the underlying science given in clear and simple language. It’s not exhaustive, but it covers the essentials”. It’s an easy and enjoyable read for all ages, particularly for people who are looking for a thorough “introduction” to climate change. The title, “Global Weirdness,” is a play on “global warming” because as the authors explain, the future is unpredictable and many things can happen.

The book itself is divided into four parts: What the Science Says, What’s Actually Happening, What’s Likely to Happen in the Future, and Can We Avoid the Risks of Climate Change?, where each part is comprised of many short (2-3 pages each), straight-forward chapters on various topics and myths about climate change.

A good example is Chapter 11: “The Ozone Hole Is Not Global Warming. Global Warming Is Not the Ozone Hole.” The build-up of chlorofluorocarbons (CFCs), a gas emitted from refrigerators, air conditioners, and hair sprays, in the stratosphere above Antarctica led to the formation of an ozone “hole.” Or really, as the authors explain, not so much a hole but a very thin layer of ozone molecules. The ozone layer is important because it bounces back UV light from the Sun so it does not reach the Earth and thus keeps the Earth cool. But the ozone hole isn’t large enough to cause wide-spread global warming, and CFC’s themselves are pretty minor greenhouse gases compared to carbon dioxide and methane.

Global Weirdness is a great book to have in the office, home, or classroom. It may simply reaffirm your knowledge on climate change, but it may also teach you new facts or introduce you to new issues. Either way, it’s a fun, easy read that is sure to provide you with a useful groundwork for exploring more topics about climate change.