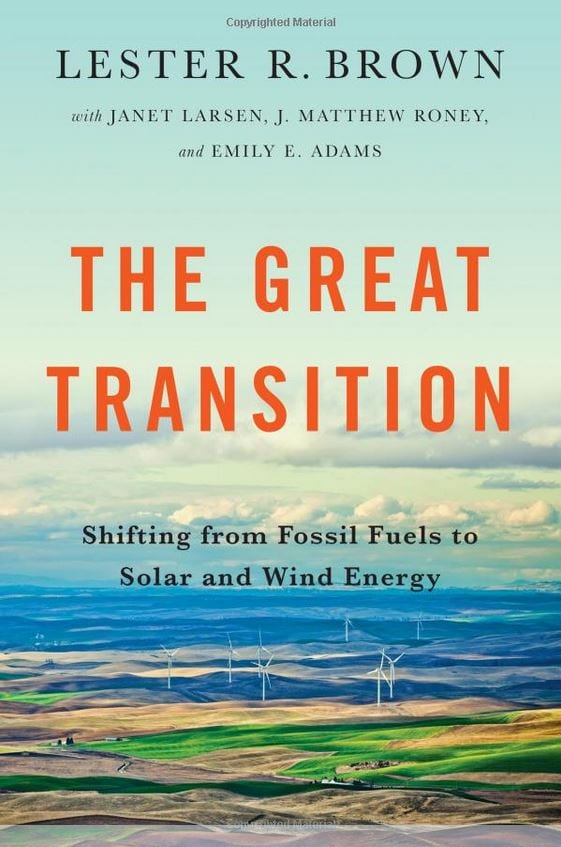 Lester Brown’s most recent book, The Great Transition: Shifting from Fossil Fuels to Solar and Wind Energy, details how the primary energy sources used to power the world are rapidly moving from fossil fuels to renewable sources. This transition is occurring so quickly largely due to three factors: the vast potential for renewables, their growing economic feasibility, and the power of the consumer.

The potential for renewable energy is infinite. If it could all be harnessed, the energy from sunlight that hits the earth’s surface in one hour is enough to power the world economy for an entire year. Wind energy is also abundant; the wind energy that can be harnessed in Texas, North Dakota, and Kansas is cumulatively sufficient to meet the electricity demands of the entire United States.

Beyond the potential for renewable energy, the economics for them are growing increasingly feasible. A popular opposition to increasing renewable energy and limiting fossil fuel usage is that it results in economic losses but this argument is contracted by evidence from the Regional Greenhouse Gas Initiative (RGGI) cap and trade program. From the launch of the program in 2009 through 2013, the nine states participating in the cap and trade program reduced power sector emissions by 18%, while the rest of the country reduced emissions by only 4%. Simultaneously, the economic growth in the nine cap and trade states outpaced that of the remaining 41 states. The cost of renewable energy sources are also dropping at a rapid rate: In 1972, the PV (solar) panel price per watt of energy produced was $74 but by mid-2014, the same figure was $0.70, a 99% decrease.

Another aspect driving the shift to renewables, and one that will be crucial moving forward, is the power of the consumer. The energy economy is becoming increasingly localized; instead of relying on an energy source, such as oil, being mined and shipped from halfway across the world, consumers can now rely on power generated as close as their rooftops. Individuals can also make considerable impacts with simple actions. For example, the total energy saved by replacing one 100-watt incandescent lightbulb with an LED would power a Toyota Prius driving from New York to San Francisco. Utilizing car share programs such as Enterprise CarShare and Zipcar can also have a profound effect, as studies of North American programs reveal that for every one car sharing vehicle, an average of nine privately-owned vehicles are removed from the roads.

Writing with plenty of statistics and details, Brown effectively presents his findings in an interesting way that is also simple enough for readers to understand, regardless of their prior knowledge on the topic. A comprehensible, interesting, and informative read, The Great Transition would serve as an excellent high school reading resource, meeting needs for content literacy in a variety of science courses.