The Microbiome and You

If you’re reading this, you almost certainly consider yourself a human. However, less than half of the approximately 32.7 trillion cells inside your body are human. The majority actually belong to microorganisms, which thrive inside us and provide a number of services in exchange for rent. Many of these tiny hangers-on live in our digestive tract, and they help in a variety of ways: protecting us from infections, breaking down food, and even producing some of the vitamins that we need to build new proteins.

Recently, there’s been an uptick in humans showing our neighborly gut bacteria some gratitude. Sales of the fermented tea kombucha rose over 37% in the past year, and use of probiotic supplements by adults in the US quadrupled over just five years. Some have even used the term “superfood” (move over, avocadoes) to describe kefir, miso, kimchi, and others that contain live cultures and help maintain a healthy gut.

However, most of this interest has been centered around the human body. What if we used this microbiome trend to think not just about our own health, but that of the planet—our “macrobiome”? Using the power of gut bacteria, scientists think we could put a dent in our greenhouse gas emissions. All we need to do is to share the probiotic love with our bovine friends.

There are about 1.4 billion cattle living today on farms all over the world. Because cows are ruminants and eat a high-volume, extremely fibrous diet, they have to do a lot of digesting in their four stomach compartments. This digesting has side effects, most notably methane gas, which is released in the form of cow belches or flatulence. Methane’s global warming potential is estimated at 28 times that of carbon dioxide, so a little bit can have a relatively large impact on the climate. According to the UN Food and Agriculture Organization, beef and cattle milk production account for the majority of all livestock GHG emissions, respectively contributing 41 and 20 percent of the sector’s emissions. And our global demand for meat is rising, which means we are raising more and more cattle, releasing more and more of this potent warming gas.

We don’t have to accept this status quo, however. Just like us, cows live in symbiosis with billions of bacteria that help them digest. Technically, it’s these microbes that generate the methane gas, not the cows themselves. Mick Watson at the University of Edinburgh has been sequencing the genomes of microbiota in the cow gut. Not only did this help identify the most likely culprits, or methanogenetic microbes, it also helped isolate some new digestive enzymes in the cows. These could potentially be used to reverse engineer cows’ diets so they can process food more easily and create less gas byproduct. In addition, scientists hope they could add or remove particular microbes from the cow’s inner ecosystem. This can be difficult, though, without negatively impacting the cow’s health and considering the bacteria’s rapid rate of adaptation.

However, there is precedent for this kind of strategy. Researchers in Australia helped livestock goats to digest a particular plant by giving them microbes isolated from the guts of Hawaiian goats who could successfully eat that plant. Some farmers already use cow probiotics and supplements to help aid cattle’s digestion and improve their immune systems. Currently, there’s a feed supplement called Mootral on the market that claims to use garlic and citric acid to reduce methane-producing microbes in the cow gut, but its statements have not been definitively scientifically reviewed.

While it will take all of us making macro-level changes to reverse the devastating impacts of climate change, it’s good to know we may have trillions of micro-allies to join the fight. 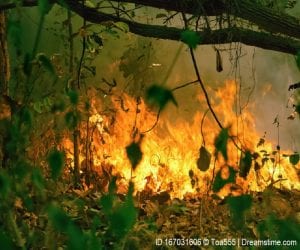 Through graphing and guided questioning students examine the cause and effect relationship between human activities and methane production. They... Read More »