The Population Education team is thrilled to announce we have made a significant update to one of our most popular lesson plans, Earth: The Apple of Our Eye. This blog provides an overview of all updates made to the free-to-download ‘Earth as an apple’ middle grades lesson plan and high school grades lesson plan, and explanations for why we made these updates.

In the original Earth: The Apple of Our Eye lesson, we focused on arable land, defined by UN Food and Agriculture Organization (FAO) as land under temporary crops, meadows and pastures. After reviewing the FAO’s most updated definitions, we determined arable land does not encompass all the land we are currently using to grow our food, which was the intended focus of the lesson plan. Therefore, we shifted the focus of the lesson to the all-encompassing term for land used to grow food: agricultural land. The FAO defines agricultural land as arable land, permanent crops, and permanent pastures.

Framing Agricultural Land as a Resource to be Sustainably Managed

We decided to create a version of the “Earth as an apple” lesson specific for middle grades, and another for high school grades, in order to utilize the most fitting skills and useful content for at-grade standards alignment. The apple cutting portion in Part 1 is similar in both versions, though the discussion questions vary. Both versions have a new Part 2 that focuses on soil health, but the procedures are different, and we’ll explain both here.

In the original Earth: Apple of our Eye lesson plan, an apple is sliced into pieces to model the amount of total arable land available on the Earth’s surface. In this new edition, we are still slicing an apple into pieces, but now it is to model the current amount of agricultural land on Earth. The specific apple slices in the new edition are as follows:

After the apple slicing narrative, students engage in discussion questions rooted in inquiry-based learning, ranging from considering how an increasing human population might impact the sizes of various apple segments, to why so much more agricultural land is dedicated to producing livestock than producing crops directly consumed by humans. 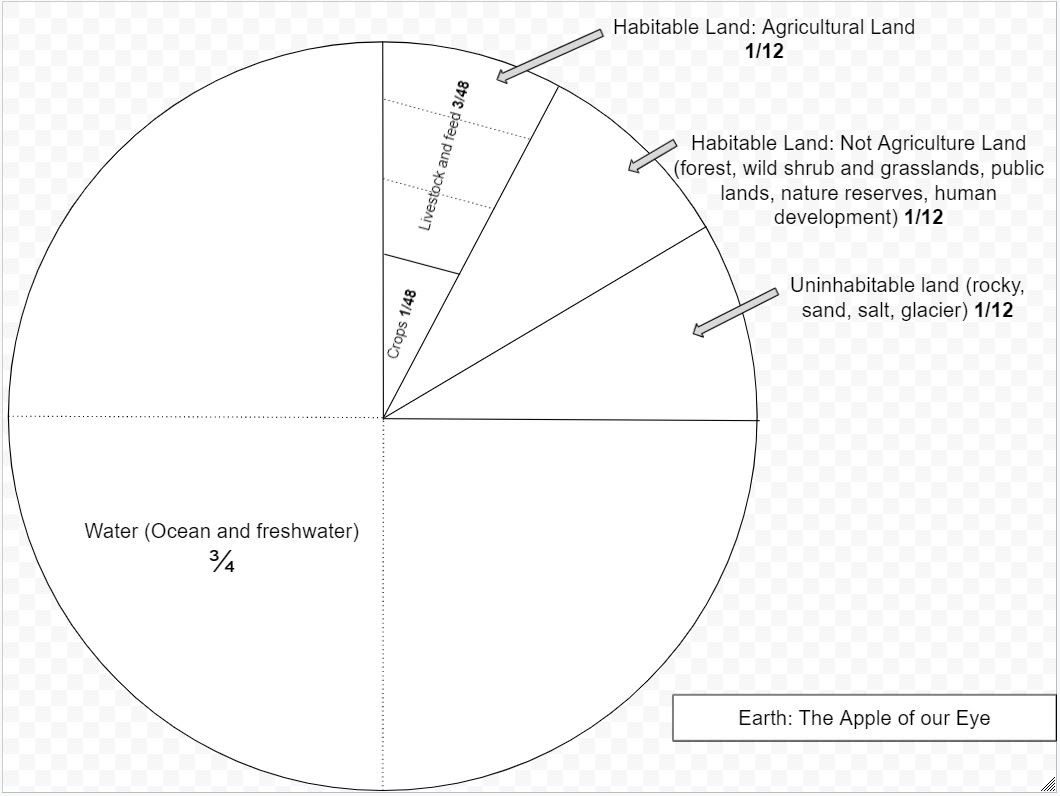 In the middle school lesson plan, Part 2 asks students to read and annotate, “Do We Treat Our Soil like Dirt?,” a National Geographic article with an adjustable text-level, which highlights threats to soil health and potential solutions. Then, students partner in small groups to conduct research and create a presentation that includes an explanation of one of the many threats to soil, a solution to respond to that threat, and an explanation of why it is important to protect soil.

The high school level lesson plan’s Part 2 also has students read the Nat Geo article as a primer to soil health issues. But then students investigate a soil topic and answer guiding questions from a provided Soil Conservation Assignment Card. This investigation prepares them for the upcoming “Ask the Experts” Soil Fair, where each group sets up a station around the classroom with a visual presentation on their topic and students take turns serving as the “expert” – being on hand to answer questions about their soil topic from peers.

Both of the new editions of Earth: The Apple of Our Eye wrap up with a reflection activity as the assessment and offer follow-up activities to extend and localize learning.

Through the new procedure in both versions, students will draw connections between population growth, agricultural land, and human-caused threats to agricultural land and soil health. Through dynamic research, synthesizing new and past knowledge, and creating peer presentations, students take learning into their own hands and are able to draw important connections for themselves.