In 2018, nearly seven percent of the global population lived in megacities, or cities with more than ten million residents. As global population continues to grow and people continue to migrate to urban areas, megacities’ significance will only increase in the coming decades.

Tokyo, Japan is currently the world’s largest megacity, with a population of 37 million people (nearly the size of California). However, Tokyo is set to lose that status soon, as its population is projected to decline to 32 million by 2050 even as other cities continue to grow. One of the most notable of those growing cities is Lagos, Nigeria. At 14 million people, its population has already doubled since 2000, and projections show that Lagos will be home to over 30 million people by 2050.

Challenges in Urban Sprawl and Sustainability

Exploring the commonalities and differences between these two megacities sheds light on the effects of urbanism throughout the world. Though Tokyo and Lagos have distinctly different development patterns and resulting social and environmental issues they share many of the same land use challenges. 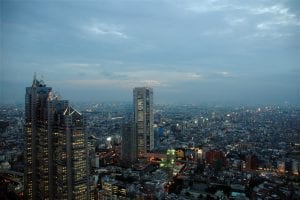 The Sprawling Footprints of Tokyo and Lagos

Urban sprawl describes not only the tendency for cities to expand outward, but specifically the way cities expand in an unplanned, low density way that fails to connect residences with city services and often requires people to rely on cars for transport. In recent years, urban planners have targeted urban sprawl as an important problem for cities to fight, with “smart growth,” or compact, mixed-use land development, as a potential solution moving forward.

Tokyo has dealt with urban sprawl since the 1950s, when post-war rebuilding led to a boom in rural to urban migration and the city incorporated surrounding villages into one large, unplanned metropolis. As each neighborhood of the contiguous city maintained a robust local government, vital services like sewage and roads slowly expanded to reach every neighborhood and transform slums.

As a result, Tokyo’s population density is not concentrated around a single, central hub. This decentralized city structure incentivized the development of an extensive metropolitan railway system, which extends far into Tokyo’s urban area and has made cars less necessary for many residents. Today, Tokyo has started a number of “land readjustment projects,” which redevelop low density areas and promote the mixed-use ideals of smart growth. 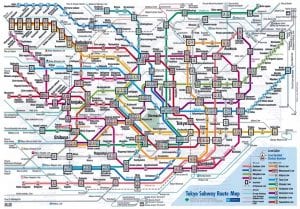 Much of Tokyo’s ability to adapt its land has been aided by its comparatively slow population growth rate. Lagos, on the other hand, is one of the most rapidly growing cities in history. Its physical footprint has nearly doubled in size in just over 20 years, with population density relatively low compared to other megacities.

Today, 70% of Lagos’s population lives in slums, where they lack access to many important city services and protections under the law. With developers reassessing urban land use, some slum dwellers have found themselves forcibly removed to make way for planned developments. Waterfront communities are especially at risk – land that is prime real estate for luxury developments is the same land that serves as both the home and source of income for current residents, most of whom are fisherman. Along the Lagos Lagoon, over 40 informal settlements were at risk of eviction in 2016.

Lagos’s public transit has struggled to expand in tandem with the city limits, with the city primarily served by a large bus network. As the city has continued to expand, there has been an increased emphasis on transport design. Lagos unveiled Africa’s first Bus Rapid Transit corridor in 2008.

Environmental Degradation in Tokyo and Lagos

Even as megacities adapt to use their land more efficiently, they still have outsize impact on surrounding environments. Megacities cause significant strain on ecological systems for a number of reasons. Because they often develop more rapidly than other areas, megacities draw on resources more quickly than policies can be implemented to ensure sustainable consumption. Similarly, the sheer scale of megacities causes them to deplete resources much more rapidly than other settlements.

One of the most enormous problems that Tokyo faces is the urban “heat island” effect. Because Tokyo is a center of manufacturing, it uses significantly more energy than surrounding areas. All the energy used in production and daily activities creates waste heat, and human changes to the physical landscape, like tall buildings and roads, make it more difficult for natural processes to cool the city down. This increased temperature causes health problems for the city’s residents, exacerbates the effects of climate change by subjecting Tokyo to more torrential rains, and reinforces itself as Tokyo uses even more energy to combat the heat. Effects to mitigate the heat island effect often involve using more of other resources, such as sprinkling water over large areas to cool the city down. 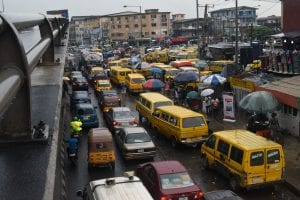 Meanwhile, Lagos’s water supplies and infrastructure have struggled to keep up with the needs of its growing population. In 2016, water supply was less than half of what was needed, and overuse of groundwater has contaminated aquifers with seawater and other pollutants. As a coastal megacity, the degradation of Lagos’s water and land are intrinsically linked. Wetlands, mangroves and swampland have been lost to development, erosion, and contamination, threatening the biodiversity of surrounding areas. The amount of developed coastal land in Lagos increased by 13% between 1986 and 2002 while the amount of swampland decreased by 11%.

Megacities in the Future

The physical composition of megacities will only continue to change as the global population grows larger and more urban. It is vital that city leaders continue to push for efficient, thoughtful uses of land and that the future generation understand the complex social and environmental issues these sprawling metropolises face. 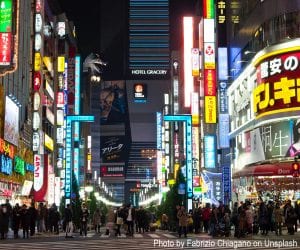 Shenzhen: From Fishing Village to Megacity in 30 Years 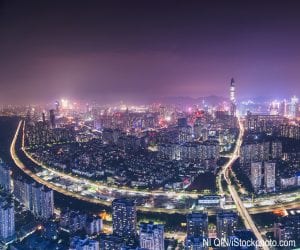