Throughout human existence we have relied on oceans for many things: food, recreation, medicine, economic opportunities, among many others. They play a significant role as both the world’s largest habitat and its climate regulator. However, the world’s oceans have suffered a lot at the hands of humans and population growth has increasingly compounded the problem by pushing oceans to their limits and altering ecosystems beyond their natural state.

Coral Bleaching: Coral reefs shelter 25 percent of marine species, protect shorelines, support fishing industries, and provide tourism for coastal communities. However, corals are increasingly stressed by changing conditions like warming water temperatures and pollution. When this happens, algae living in their tissues disappear leaving them to turn completely white and consequently making them more susceptible to disease and death.

Overfishing: Our seas have been considered a limitless bounty of food for centuries. However, unsustainable fishing practices and an increasing demand for fish are pushing many fish species, such as Bluefin Tuna, to the brink of collapse. Data shows populations of fish and other marine vertebrates, including marine mammals, reptiles and birds have halved since 1970.

Pollution: Much of the waste we produce on land eventually reaches the oceans, either through deliberate dumping or from the run-off of drains and rivers. This garbage is often ingested by marine animals and sea birds, putting their lives in danger. Additionally, toxic chemicals leach out of ingested plastics, infecting the tissues of fish – a dangerous condition for the fish themselves and the humans who eat them.

Warming Temperatures: Due to climate change, the oceans are absorbing too much heat and carbon dioxide, making waters warmer and more acidic. When the oceans get too warm, plants and animals that live in the waters must adapt, or they are at risk of dying. This includes coral, algae and plankton, which are at the bottom of the food chain, but also species like fish, seals, and whales, who depend on this tiny marine life.

Population growth has already initiated dramatic changes in coastal ecosystems in various ways and our future will greatly depend on our ability to restore ocean health and protect marine habitats.

Ocean health is one of the topics for the 2016-2017 World of 7 Billion student video contest. For more information on population and climate, check out the contest background resources.

Drop in the Ocean 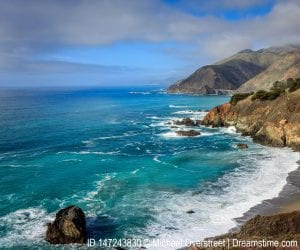 A visual demonstration models the limited ocean area where most ocean life is found, followed by a discussion and... Read More »