In some ways, the basic things that people require to survive have stayed the same all throughout history – things like food, water, shelter, and clothing. Our hunter-gatherer ancestors roamed far and wide to find water and nutritious food; food shortages famously spurred peasant uprisings during the French Revolution. But in modern times, we take a more expansive view of what it means for something to be a “basic need.” Basic needs are not just our physiological requirements, but the things a person needs to live a happy, healthy, stable life.

As people have changed over time, the things that they need have changed with them. Many of the things that we take for granted as integral parts of our lifestyles are things that people living 100 years ago wouldn’t be able to identify. More critically, there are millions of people around the world whose basic needs are not being met and who grow increasingly alienated as their needs grow. Achieving equitable access to the fundamentals of modern life is critical to ensuring a high quality of life for all people everywhere.

So what are some basic needs that have changed over time? And what happens when people today don’t have access to these basic needs? 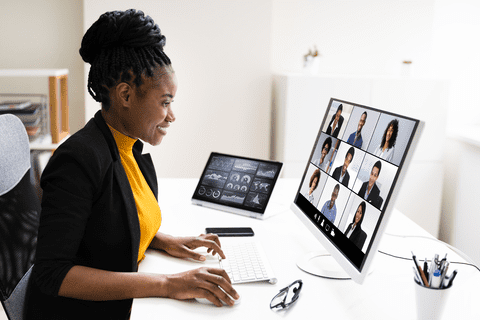 The Internet is a Basic Need in Modern Society

In the 1970s, the Internet was only a faint idea for most of the world’s people. ARPANET, the system that presaged the later development of the Internet as we know it, was a specialized network dominated by university researchers and governmental bodies. The development of microprocessors led to the personal computer revolution, where computers massively shrunk in both size and price and became available to the public at large. And home computers paved the way for smartphones as we know them today. Smartphones made computing not just accessible, but portable. Billions of people walk around every day with tiny computers in their pockets and unprecedented access to information through the Internet.

At first glance, Internet access might seem too frivolous to be a basic need. After all, nobody exactly needs cat videos on demand to survive from day to day. But consider all of the processes that are conducted entirely over the Internet. Having an active e-mail address is a necessity to access services to pay bills or create a bank account. A person looking for a job needs the Internet to search employment postings, submit an application, and check their e-mail for a response. Getting a high school or college degree requires the Internet to conduct research and submit assignments. During the COVID-19 pandemic, the Internet became even more integral. School, work, and entertainment shifted entirely online at the same time that Internet access became less accessible due to the closing of libraries and other places with free Internet.

Even the Internet in its most basic form, communication from person to person, has become integral to securing human rights and other needs. For instance, the government of Myanmar was overthrown in a military coup in early 2021 and violent repression of its citizens soon followed. Citizens used social networks to organize protests and share information about killings that otherwise would have gone unreported. The new government shut down Internet access for the entire country in an attempt to quash the dissension brewing online. Activists now use SMS and radio to share information, but shutting down Internet access cut off a huge portion of the population from knowing what was going on.

No wonder the United Nations in 2016 declared Internet access to be a basic human right. 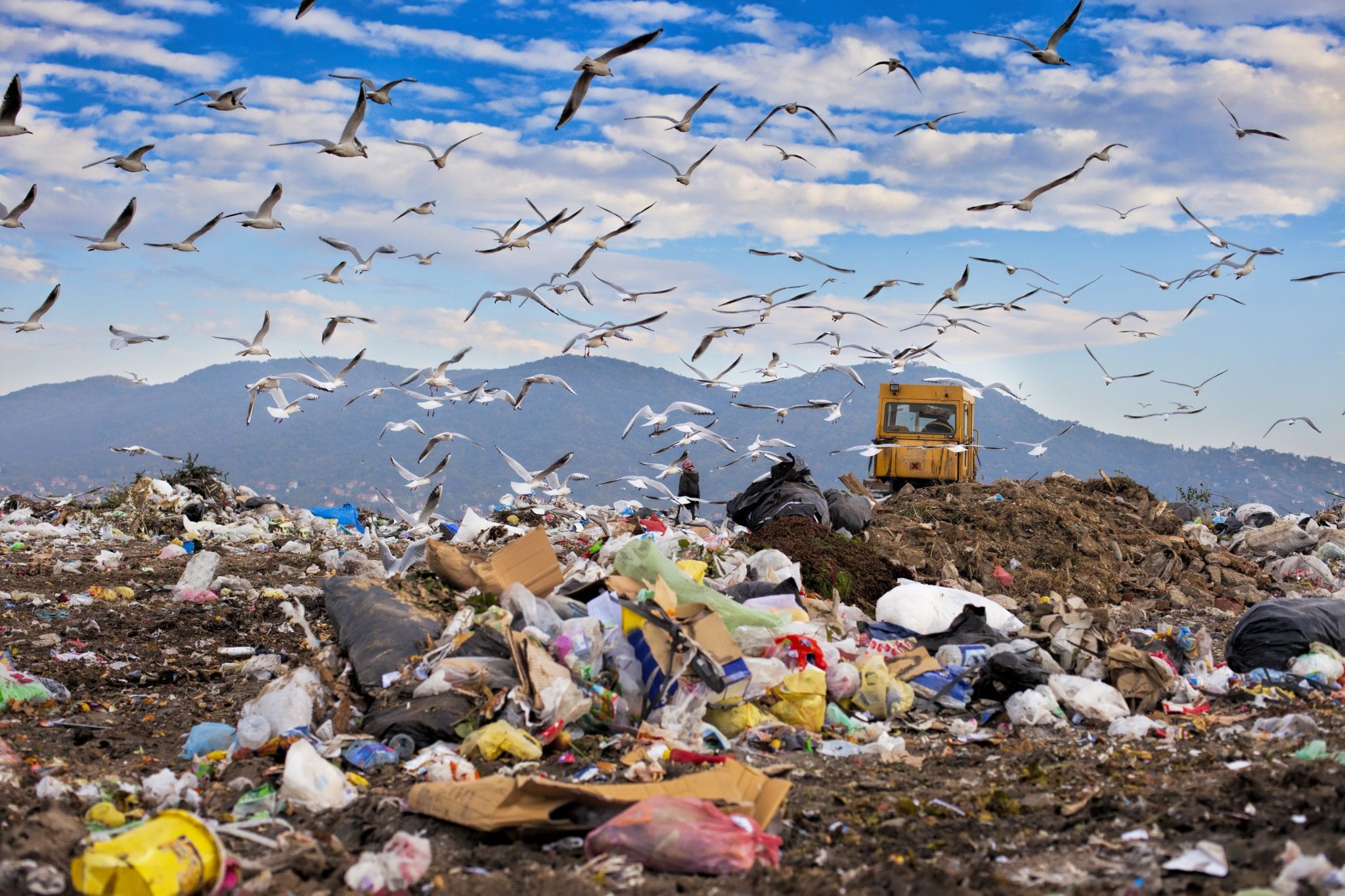 There was a time when the garbage of our day to day lives was entirely biodegradable and people didn’t worry about the trash they left behind. The massive uptick in human population growth happened at the exact same time that production and distribution methods became more sophisticated and the things people used became more disposable. Now, humans generate billions of tons of waste that will remain intact for thousands of years, and all of that waste has to go somewhere.

Unfortunately, waste does more than take up space. The conveniences of the modern world create new pathways to sickness and suffering. Waste that includes untreated human excreta spreads many deadly diseases; in fact, these illnesses are the leading cause of death for children worldwide. Plastic fractures into smaller pieces without degrading, leading to microplastics invading water and food supplies. Poisonous metals from discarded electronics seep into soil and make entire areas unlivable. These new sources of contamination require new ways to manage that waste. Modern sewage systems were built in the 19th century to handle the influx of waste from people and industry. Common household trash only started to accumulate in landfills in the 1960s, when people realized that private, open dumps contributed to the spread of disease.

In areas with strong governance, systems of waste treatment and management keep most waste away from people. But many people around the world do not live in places with that infrastructure or the wealth to create it, and waste is either managed on an ad hoc basis or not managed at all. The consequences of this unmanaged waste most often fall upon the world’s poorest people. There’s a reason that trachoma, a disease that causes permanent blindness and is spread through poor sanitation, was eliminated in North America and Europe in the 1950s but infects 90 million people annually in the developing world. 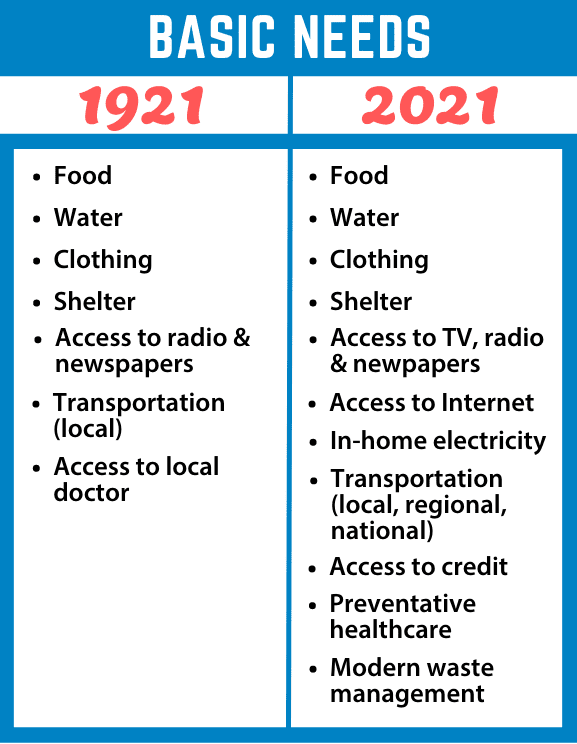 Meeting People’s Basic Needs in the Past and Future

People’s basic needs will surely change into the future just as they have in the past. Assessing the state of those needs requires continuous insight into the way people live their lives. Guaranteeing that people have those basic needs is even more complicated. Human innovation expanded the number of things people require to live happy and healthy lives, but human innovation is also how we will get to the day where no person sees their needs unmet.

What are People’s Basic Needs?

An elementary-level reading that describes the basic needs for all people. Read More »

Needs vs. Wants in a Finite World 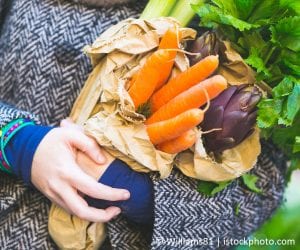 Students discuss the varying levels of human needs and then evaluate their own needs and wants and the resources... Read More »