The Washington DC metro-area is the 7th largest in the US; it is consistently ranked as one of the most congested areas in the country and has the daily traffic jams to prove it. In an attempt to relieve some of this traffic congestion in the northern part of the area, the construction of a new metro (subway/train) line – the purple line – has been proposed and was the topic of the Washington Post’s recent article Purple Line’s obscure obstacle: The endangered Hay’s Spring amphipod.

Making environmental decisions is not easy, it’s not neat, and they are rarely black-and-white. Take the construction of this new metro line – On one hand we have a new rail line that will keep thousands of cars off the roadways and thus, emissions out of the atmosphere. It could also help reduce the sprawl that we see in the area by connecting areas to the central part of the district. On the other hand we have an endangered species, the Hay’s Spring amphipod, that is only found in this area and whose habitat will be significantly altered by the purple line’s construction. So what’s the best decision?

As someone who cares about the environment, it’s a hard choice. We either build the purple line and thus deplete the amphipod’s habitat and potentially cause its extinction, but reduce car emissions and slow sprawl. Or, we don’t build the purple line and save this rare species but do nothing to alleviate the congestion and pollution of the current transportation situation. The activities Take a Stand and What Would You Do?, for middle/secondary and upper elementary students respectively, consider these types of conundrums. Students are given a multifaceted situation and asked to choose a viewpoint and make their case to back up that decision.

As Washington DC’s population continues to swell, questions like the purple line will continue to come up. Does your area have any similar eco-dilemmas that you could pose to your students? A local example can help motivate their curiosity and create debate in which they’re more invested.

Climate Modeling for the Classroom 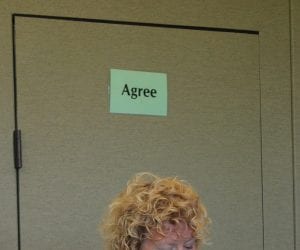 Students express their thoughts on issues related to population and the environment, then research a specific issue and write... Read More »