Some economists think that an inverted triangle shaped population pyramid is scary. Conventional wisdom has been that when a country has a higher elderly population than working age population, like Japan will face in the years ahead, disastrous economic consequences will ensue. It was refreshing to see this recent article, “Japan’s Ageing Population Could Actually be Good News,” which takes a much brighter and more sustainable outlook. It reminds us that the ratio we should concern ourselves with is not necessarily “working” vs “elderly” but rather “working” vs “non-working.” And while the elderly population is increasing, the dependent/non-working percentage of children is smaller.

The article, appearing in The NewScientist, asserts that Japan’s declining population (down for the fifth year in a row and by 244,000 people in just the last year) could actually spell good news. Here’s a brief recap of the reasons why:

We all know that any population, whether of a country or the world, cannot go on growing forever. Japan is setting a much needed example for all of us – a goal of reaching a sustainable population with a high quality of life for all its citizens. I think everyone would agree that there’s nothing scary about that.

Sometimes the terms “life span” and “life expectancy” are used interchangeably, but they have different meanings. So what is... Read More » 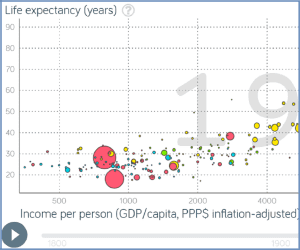