Whenever I facilitate teacher workshops close to home, conversation often turns to the Chesapeake Bay. It’s not only our local estuary here in the DC area, but also the largest estuary in the country, fed by 50 rivers and streams in six states and home to 18 million people. Beloved by boaters, fishermen, nature and seafood enthusiasts, the Chesapeake has also taught us about the effects of pollution on a vital watershed.

Years of agricultural and industrial runoff has taken its toll on the Chesapeake, affecting seafood harvests, wildlife habitat and human health. According to the Chesapeake Bay Foundation (CBF), every year some 300 million pounds of polluting nitrogen reaches the Chesapeake Bay, mostly runoff from farms and wastewater treatment plants. This nitrogen feeds algal blooms that block sunlight to underwater grasses and suck up oxygen when they die and decompose, creating massive “dead zones” in the Bay.

CBF and local citizen action groups have worked tirelessly to enact laws to “Save the Bay,” and their efforts are beginning to show results. In 2011, the Environmental Protection Agency (EPA) put the Chesapeake on a “pollution diet” to dramatically reduce the levels of nitrogen, phosphorus and sediments that states can allow to flow into the Bay from municipalities and farms. The 15-year plan called for improvements to water treatment plants and better conservation efforts by farmers, to help restore the Bay to its former health and boost the economy for tourism, recreation and seafood harvests. Today, indicators for pollution, habitat preservation and fisheries health are all showing improvements and the Bay is on the road to recovery.

But that could all change if proposed cuts to the EPA are implemented. The recently released 2018 budget proposal released from the White House calls for elimination of the current Chesapeake cleanup. “Now, by zeroing out the EPA’s planned $73 million for the cleanup next year,” writes the Washington Post editorial board, “the administration’s budget would mark a pollution binge even as the pollution diet’s manifest benefits were working to revive a body of water that was becoming a lifeless soup.”

Water quality in our local areas and around the globe is a topic for some of Pop Ed’s most popular teaching activities. The one that deals most directly to the Chesapeake, “Who Polluted the Potomac?” involves upper elementary and middle school students in an interactive story about the life of the river from indigenous populations 400 years ago to the nation’s capital region today. As the story is read, students pour a “pollutant” into a bowl of water that represents the river. Pollutants from individual activities (gardening chemicals, car washing runoff, beachside litter) to those from utilities, industries and farms (chemicals, coal residue, fertilizers, etc.), illustrates how each character in the story impacts the health of the river. A debriefing of the story is followed by some creative river cleanup. A similar format is used in “Code Blue: Our Endangered Ocean,” which traces 500 years of ocean health and includes impacts from oil rigs, plastics, industrial fishing practices, algae blooms, acidification and more. It’s environmental science, world history and civics in one activity.

I also refer to the Chesapeake when engaging groups of all ages in “One for All,” a “tragedy of the commons” game that challenges students to sustainably share a common renewable resource by looking out for the long-term needs of the group and not just the short-term needs of one player. My example to the students is the Maryland’s famed blue crabs. When fishermen harvest as much as they want, there often aren’t enough crabs left to grow and reproduce for future years. Working together, the crab populations can be maintained year after year.

My hope for the Chesapeake is that I can continue to use it to teach about how people can work together to restore a vital, treasured ecosystem that supports the economy, wildlife and the well-being of millions of people for generations to come. 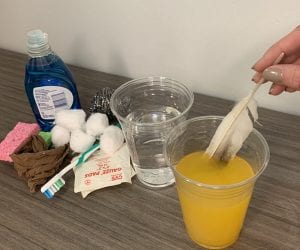 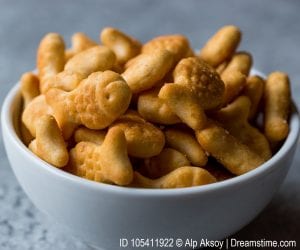 Students share a bowl of goldfish crackers to simulate even and uneven consumption of limited resources. Students will be... Read More »