Summer is upon us! Already a week into the season, there is no time to waste in compiling your optimistic, of-course-I’m-going-to-get-to-all-of-these-books Reading List. We, at Population Education, want to help. Our staff compiled a list of 15 reads for Summer 2014 – a little fact, a little fiction, and a whole lot of fun. Take a look!

1. Garbology: Our Dirty Love Affair with Trash, by Edward Humes
Hold your nose! Humes’ findings cause quite a stink in this journalistic dig through America’s deposits. And hoarding is just the beginning.

2. The Imperfect Environmentalist: A Practical Guide to Clearing Your Body, Detoxing Your Home, and Saving the Earth (Without Losing Your Mind), by Sara Gilbert
Informative. Humorous. No judgment. Life-style changes can be overwhelming, so start small. Gilbert’s book may just be the aid you need to find your balance.

3. Flight Behavior, by Barbara Kingsolver
Set in present-day Appalachia, Dellarobia Turnbrow must confront her own understandings of cause and effect when a local valley becomes home to millions of monarch butterflies. Named “Best Book of the Year” from the Washington Post and USA Today in 2012!

4. The Man Who Planted Trees: Lost Groves, Champion Trees, and an Urgent Plan to Save the Planet, by Jim Robbins
Standing on the shoulders of giants, and by giants, he means trees. Robbins follows the trials of David Milarch to clone the oldest and largest trees on Earth, breathing new life into the world.

5. Arrival City: How the Largest Migration in History Is Reshaping Our World, by Doug Saunders
A hopeful perspective on hyper-migration. Saunders takes readers on a globe-trotting expedition to ride along with the millions taking part in the most expansive movement of people in history. This is one of those books that stays with you.

6. Oil and Honey: The Education of an Unlikely Activist, by Bill McKibben
A tell-all from the environmentalist frontlines. Speaking about both sides of the climate change activist front, McKibben relays the stories of people who live locally, and the national voices against fossil fuel consumption.

7. My Year of Meats, by Ruth Ozeki
Much has changed since the publication of Upton Sinclair’s The Jungle. Or has it? Two women on opposite ends of the Pacific will soon find out as their lives become unexpectedly intertwined.

8. The Boy Who Harnessed the Wind: Creating Currents of Electricity and Hope, by William Kamkwamba
Doers are often initially labeled the crazy ones, or in William’s case: misala. But this is the story of a young man who not only harnesses the wind but also the human spirit.

9. Countdown: Our Last, Best Hope for a Future on Earth?, by Alan Weisman
With the follow-up to The World Without Us, Weisman continues on his quest for answers. This time to the question: how might we continue to have a world with us?

10. The Evolution of Calpurnia Tate, by Jacqueline Kelly
This story is more than just a little girl’s discovery of the natural world around her; it speaks to the painfully real obstacles that society has placed in front of women who dream of being scientists.

11. Raising Elijah: Protecting Our Children in an Age of Environmental Crisis, by Sandra Steingraber
Alarming and informative, Steingraber’s book highlights the direct impact pollution is having on youth, and the challenging task parents face in protecting their children from it. Wonderfully written to be accessible to all, this work is a continuation of her earlier writings Living Downstream and Having Faith.

12. No Impact Man: The Adventures of a Guilty Liberal Who Attempts to Save the Planet, and the Discoveries He Makes About Himself and Our Way of Life in the Process, by Colin Beavan
Timely. Imperfect. Honest. This is the first-hand account of the Beavan family’s experiment to living one year with as little of an environmental impact as possible. And in all places, NYC.

13. Goat Days, by Benyamin
First published in Malayalam is the story of Najeeb, a migrant worker, who sets out for the Persian Gulf in hopes of sustaining financial security for his family. What unfolds is truly remarkable and not often the kind of narrative that gets told.

14. The Story of Stuff: How Our Obsession with Stuff Is Trashing the Planet, Our Communities, and Our Health – and a Vision for Change, by Annie Leonard
Witty and detailed, this book builds upon the previously released documentary that became an international cry for action. Leonard not only gives a summation of the root causes behind overconsumption, but she also provides solutions to reversing the cycle in a style that’s impossible to ignore.

15. Flush, by Carl Hiaasen
Mystery, adventure, and activism for all ages. Set in the Florida Keys is the tale of Noah, a boy with a dad in trouble, and a community that is faced with an environmental crisis. It’s up to Noah and a cast of memorable characters to rescue them both! 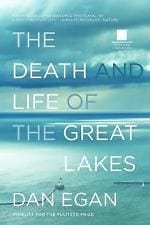