The World Population Video is one of Population Education’s signature teaching tools, simulating the history of population growth over the past two millennia and projecting growth into the near future. White dots appear on a map of the world, each representing clusters of 1 million people.  The map begins in year 1 C.E. and moves forward in time to the year 2030. As time ticks by, more and more dots are added to the map; what started with roughly 150 dots in 1 C.E. ends with over 8,000 (i.e., 8 billion people) in the year 2030. 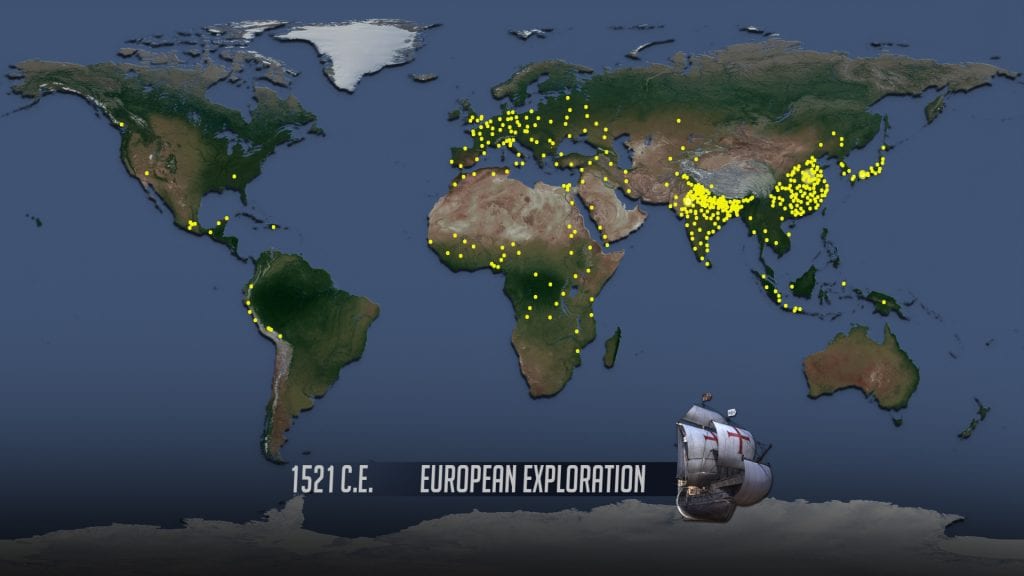 What I always find most striking about the video is how the majority of the dots are added in the final 100 years. World Population did not reach two billion until 1927; by 2030 there will be over 8 billion people on the planet and counting. This drives home a key concept in population studies called exponential growth; similar to compound interest on a loan, the rate of growth increases as more people are added to the planet. Workshop participants often gasp when they see white dots flooding large regions of the world within a matter of seconds. The video brings to life this important mathematical concept while also emphasizing the fact that almost all of world population growth occured in the past century.

The video can also serve as an important geography lesson, demonstrating which regions have the highest growth rates and largest concentrations of people. Even in 1 C.E., India and China have the largest population concentrations, and today are the two most populated countries in the world. Students can compare this to North America, which remains relatively free of dots until the last quarter of the video. The video also covers historical events using text and images, including the Black Plague, which wiped out roughly 75 million people during its peak.

The World Population Video is a must-have for the middle and secondary classroom, tying into a number of subjects from social studies to geography to mathematics. (For younger learners, we recommend introducing these concepts through the activity Population Circle, where students take part in a simulation using a circle of yarn on the floor.) You can stream the video online or order the World Population DVD for use in your classroom.

Peopling of Our Planet

Students watch the video “World Population” and participate in guided exploration of an online timeline to explore how improvements... Read More »

I was intrigued after reading in last week’s New York Times about “Big History,” an online course developed by... Read More »