The theme of Earth Day 2018 is ending plastic pollution.

By now most of us are aware of the detrimental impacts of plastic bags. A single bag can take 1,000 years to break down, using up space in landfills or entangling and harming marine life in our waterways. Even biodegradable plastic bags take at least 18 months to break down fully. But with Americans throwing away an estimated 100 billion of them annually, how can we best decrease their use?

The United States of Plastic Laws

In the years since, other states have responded in different ways. Take a look at how states have legislated plastic bags on this map.

To Ban or Not to Ban Plastic Bags?

“Preemption” plastic bag laws are a fascinating new addition to the bag law debate. In these cases, a state legislature uses its powers to prevent local and city governments from banning or taxing plastic bags.

Even without these preemption laws in place, bag laws can be a source of conflict between state and local governments. The city of Laredo, Texas has a plastic bag ban in place and is currently embroiled in a court case, fighting for its right to uphold the ban. In fact, an unlikely coalition has formed: cattle farmers, whose animals can ingest bags and die, have teamed up with environmentalists to defend the ban. The Laredo Merchants’ Association is suing the city, claiming this ban violates a state law on waste disposal. The case will go before the Texas state Supreme Court. Its decision, expected sometime this summer, will have major ramifications, either striking down or upholding bag bans across the state, including those in Houston and Austin.

Critics of plastic bag bans and taxes cite concerns about consumer choice, grocery stores receiving the fees as profit, increased cost of alternative bags, and the unfairly distributed burden of bag taxes on poor consumers. Others express concern that these laws do not do enough to decrease the use of plastic bags and believe that bag fees should be abolished and bans should be made more stringent.

The United States isn’t the only country to approach this issue with legislation. Over 40 countries have implemented taxes or bans on plastic bags. In 2017, Kenya passed the harshest of these laws, with makers, sellers, and importers of plastic bags facing fines starting at $19,000, or up to four years in prison, if caught. While some praise Kenya, whose consumers use an estimated 100 million plastic bags per year, many were concerned about the impact on the country’s most marginalized citizens. Plastic bags are colloquially called “flying toilets” and used to contain human waste in areas without access to running water, especially in informal urban settlements. The ban may lead to an increase in open defecation and a decline in health conditions in areas where infrastructure doesn’t provide people with any other options. In addition, local farmers selling their produce at market will need to invest in other kinds of bags for their consumers, or risk fines and jail time.

We can all agree that the manufacturing and usage of plastic bags has devastating consequences for our environment. But how do we fairly and effectively decrease their use? As our population grows, along with our demand for resources, it is imperative that we think critically about our policies and their impacts. 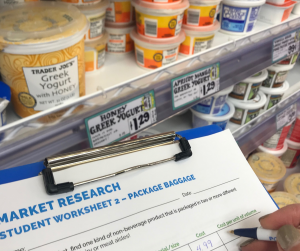 Students visit the supermarket and investigate products’ containers and packaging options to determine which products would produce the least... Read More »