The latest reports are in, and the headlines have taken off: projected human population growth is lower than past models predicted. According to the 2019 U.N. World Population Prospects, global population is growing at an annual rate of 1.07% and is expected to peak at 10.9 billion in the year 2100.

Similar U.N. reports from 1999 displayed a growth rate of 1.3%, which was down from its 1960s peak of just over 2%. These numbers show that population growth is slowing, and that’s a good thing.

Here are three of the biggest benefits of slower population growth.

As population growth slows around the world, the climate crisis will also begin to slow. It is not hard to see the connection between human population growth and climate change. All humans have needs, and needs typically translate to using the Earth’s resources, especially burning fossil fuels. As cited in a 2018 IPCC report, “Anthropogenic greenhouse gas emissions have increased since the pre-industrial era, driven largely by economic and population growth, and are now higher than ever.” Climate change is threatening the environment in ways humans have never seen. Between extreme, unpredictable weather patterns on land and the many effects of warming oceans, the Earth needs slower population growth.

With fewer humans, the anthropogenic impact on the environment could stabilize below the 1.5°C benchmark that experts warn could be the point of no return. We may never fully recover from the damage that we have inflicted on the environment, which started during the first real population boom of western industrialization, but lower population growth will lead to a healthier planet for future generations.

“Anyone who thinks that you can have infinite growth in a finite environment is either a madman or an economist.”

While most economists live by this theory, many recent studies have suggested there are economic benefits to slower population growth. As stated above, climate change is drastically changing the planet, and humans already need to adapt. Adapting to a new, less predictable climate has major costs for every country. It is estimated that climate change will reduce the United States GDP by as much as 10%. Other countries that are less equipped to dealing with these changes either financially or geographically will see even higher costs on their climate bills. If we begin to curtail population growth to a level that will reduce greenhouse gas emissions, economies all over the world will benefit.

The global economy is going through a massive shift as technology changes the lives of all 7.7 billion humans. As companies use stronger and more advanced technology to automate jobs, we could face massive layoffs all around the world, including in the United States. Studies say that driverless vehicles alone will threaten 294,000 long-range trucking jobs over the next 25 years. Other industries, from the food service to construction, and even healthcare, are also at risk, totaling 25% of all US jobs. These promising population growth projections could save us from the dangers of automation. With fewer people vying for employment, governments can focus on training and preparing their citizens for jobs that cannot be completed by robots, and avoid the looming crisis of automation.

Even if automation does not have the impact that experts predict on the job market, a smaller population would still lower unemployment rates and lead to higher wages and salaries for workers in all industries. The economy can work for a decreasing population, as long as governments around the world are prepared to shift their focus to educate and prepare citizens for more in-demand jobs that come with a smaller population. Japan has seen one of the most rapidly decreasing populations in the world over the past fifty years. As the population ages, the country has grown its jobs sector to focus on taking care of the elderly, and created healthcare and retirement systems that address the changes in their population dynamics.

Possibly the most impactful aspect of slower population growth will be the positive effect it has on human rights around the world. Slower population growth should lead to higher levels of gender equality. In many places throughout the world, women lack the opportunities that their male counterparts have to receive a quality education and join the workforce. Many cultures expect women to stay in the home and take care of children. These antiquated traditions exclude women from pursuing their own careers and making decisions about their lives. Slower population growth means that women on average are having fewer children, which gives girls and women the opportunity to pursue education and careers and continue a positive cycle of schooling, autonomy and equal status.

Slower population growth will also place a higher value on immigration. One of the reasons the United States has not seen a population decline despite below-replacement fertility rates is due to the number of immigrants the country takes in every year. Immigration will continue – despite slower population growth – as more people seek refuge from war, famine, and climate-related hardships. If unemployment continues to fall, developed countries will seek to take in more immigrants and refugees to bolster their economies. Placing a higher value on immigrants will improve the lives of billions seeking a safer life, as well as the countries that need more labor to fill their workforces.

Moving in the Right Direction

The world still has a way to go before population growth stabilizes, especially in countries that have higher fertility rates than the global average. (And keep in mind that even at this slower rate, we are still expected to add another 3.4 billion human beings to the Earth – that’s almost 50% of the current population!)

None the less, the benefits of slower population growth – a healthier planet, stronger economies, and greater human rights – show that we are on the correct course. As population demographics change, governments will adjust policies and systems to better address the important needs of their citizens. And that may be challenging at times, we are all able to prosper when the number of people on the planet steadies. 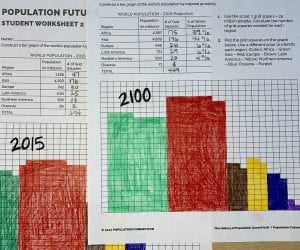