This post will examine four factors that influence the total fertility rate (TFR), including a female’s age when she has her first child, educational opportunities for females, access to family planning, and government acts and policies that affect childbearing.

The global total fertility rate, or average number of children a woman is estimated to have in her life, has been falling since the 1960s. Today, the total fertility rate (or TFR) is half of what it was five decades ago. But while women overall are having fewer children than in the past, total fertility rates still vary greatly among countries. Why, when, and if a woman has a child involves many complex societal, economic, and political factors. 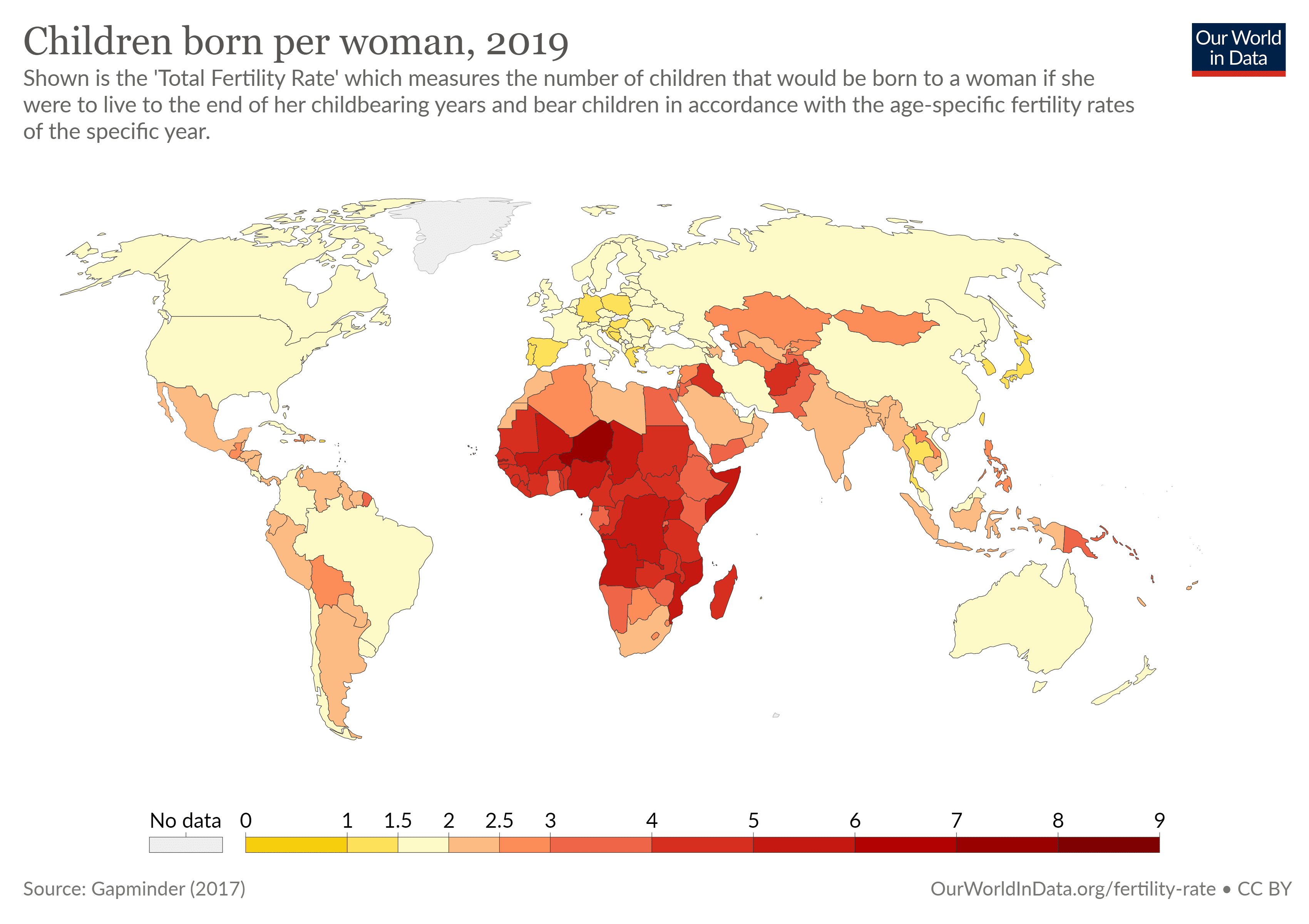 Let’s take a look at four of the main factors that influence total fertility rates around the world. 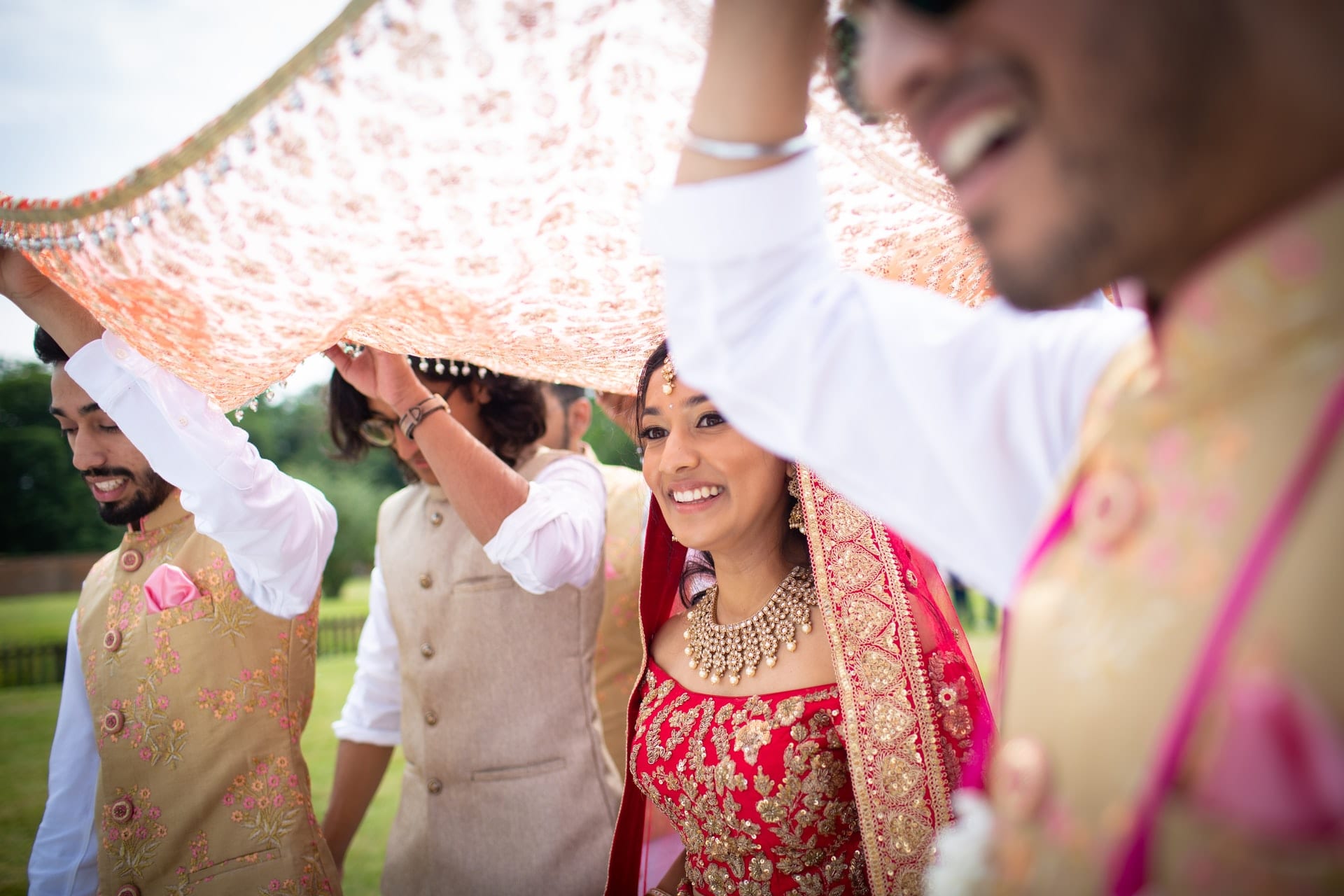 Marriage and the Age at Which Females Have a First Child

When women marry earlier in life, they tend to have children at an earlier age, and more children over their lifetime. This increases total fertility rates. Globally, the age of a woman’s first marriage varies, but brides in higher-income countries generally marry later. Child marriage also persists around the world, with one in five females married before their 18th birthday, according to UNICEF.

The human rights abuse of child marriage contributes to higher total fertility rates in many places, although child marriage has been declining. On the other hand, women who marry later tend to have fewer children over their lifetime. We currently see this in the U.S. – where women are delaying marriage and having children later. As fewer women in the U.S. are married during their “peak fertility years,” the TFR has declined. 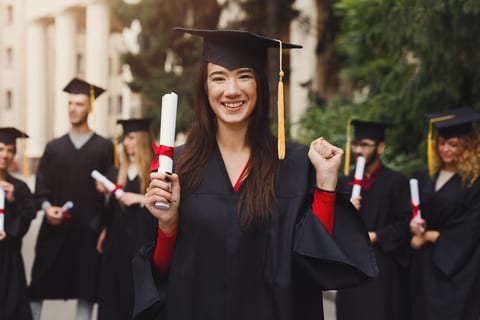 Educational Opportunities for Women and Girls

Women who have more formal education tend to have fewer children. As more women graduate, many delay childbearing as they enter the workforce and find more opportunities for employment. This results in fewer children over their reproductive years

An example can be found in Nigeria’s former University Primary Education program, which generously funded education and expanded access to free primary education throughout the country from 1976-1981. An analysis of that program found that it increased female educational attainment by two years, while fertility rates for the under 25 age segment dropped by 16 percent. The findings from the study suggest that increasing education attainment by one year can reduce fertility by 0.26 births. In the U.S., as more women complete advanced degrees and marry later, they are also having children at a later age, and fewer children overall. The U.S. total fertility rate is currently 1.7.

Studies have shown that the more education the mother has, the lower the risk of losing the child before their fifth birthday. Lower risk of child morality also correlates with women having fewer children. 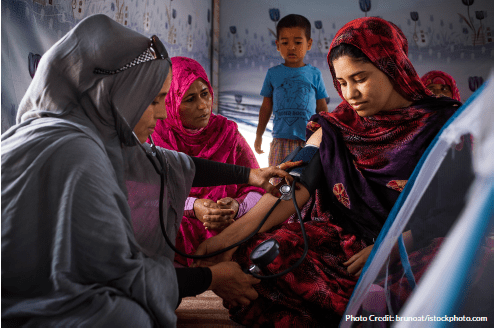 However, there are currently 270 million women of reproductive age around the world with an unmet need for family planning, meaning they want to avoid pregnancy but are not using modern contraception. There are many barriers to accessing voluntary family planning including awareness, geography, available healthcare resources in an area, social stigmas and religious, cultural, and social influences.

The UN emphasizes that increasing the participation of men in family planning is an important step, along with simultaneous female empowerment, reducing violence against women, and strengthening female rights and access to educational and employment opportunities.

Government policies aimed at pulling the strings on population – to either increase or decrease a country’s population – can have a significant impact on a total fertility rates. Government acts around childbearing range from voluntary-based programs to outright abuses of human rights and dignity through coercive measures.

Some government acts aim to slow population growth, and many countries have successfully reduced fertility rates through voluntary measures. Iran, for example, saw a significant decrease in TFR through voluntary programs. By promoting universal health care, widespread family planning information and services, gaining support from religious leaders and implementing improvements in female literacy and education, Iran’s fertility rate dropped from 7 to 2 children per woman between 1986 and 2016.

China used non-voluntary, draconian measures to forcibly reduce fertility with their One Child Policy, enacted from 1979 to 2015. As the name implies, only one child was allowed per family, with some exceptions, with fines or even forced abortions for violators. When China enacted the program in 1979, the total fertility rate was 2.7. Under the strict policy, TFR decreased to around 2.1 in the 1980s, and today, it’s near 1.5. Now, with an aging population and fewer working-age people, Chinese academics have issued grave warnings to the government to address this imbalance.

Pro-natalist policies, or policies aimed to promote births, are often used in response to population declines or when fertility drops below “replacement level.” In some European countries, the total fertility rate has dropped to around 1.5 and in Taiwan, the total fertility rate has reached 1.2, the lowest in the world. In many places with declining populations, governments have promoted incentives for couples to have children to offset future demographic imbalances. Pro-natalist government policies range from financial payments for having children and more childcare benefits, to newborn baby “starter boxes.” Denmark’s “Do it for Denmark” campaign is one example, along with Singapore’s 1988 campaign which encouraged the public with slogans like “have 3 or more!” through posters and ads.

Why is Total Fertility Rate Important?

Knowing the TFR, along with mortality and migration projections, helps us estimate how a population might grow, shrink, or stabilize over time. Data on the total fertility rate can also help predict other demographic shifts, such as future age distributions within a population. If a TFR is dropping, it may mean there will be a larger population of older adults in the future, assuming other factors remain stable. Governments and international organizations use the total fertility rate to forecast these population changes and help plan for services, education, and other societal needs. 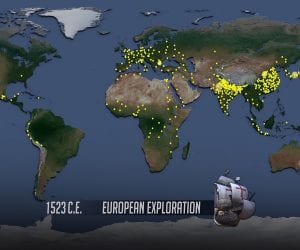