One of President Trump’s first executive actions was reinstating the Mexico City Policy, also known as the “global gag rule.” Here’s an explanation of the policy, its history and implications for communities around the world.

What is the Global Gag Rule?

The policy bars any U.S. humanitarian aid from going to any organization overseas that provides abortion services or even discusses the procedure with women. It is known as the Mexico City Policy, because the rule was first presented at the International Conference on Population held there in 1984, and then enacted by President Ronald Reagan soon after. Eleven years earlier, in the wake of the Roe v. Wade decision legalizing abortion in the U.S., Congress passed the Helms Amendment (named for then Senator Jesse Helms – R-NC), which forbids any U.S. federal funding from being used for abortion procedures overseas. That law still stands. The Mexico City Policy goes a step further, forbidding health providers overseas who receive U.S. funds from using other sources of money to provide abortions or abortion counseling – hence the term “global gag rule.” So, if a groups wants U.S. funding, it must promise not to use monies from other sources to provide or discuss abortion services.

The policy has been a political football over the past 32 years. It has been rescinded by Democratic presidents (Clinton and Obama) and reinstated by Republican presidents (George W. Bush, and now Trump). Proponents of the policy contend that it shields American taxpayer dollars from enabling abortion services overseas, even though the funding can’t be spent on these services directly. Opponents of the policy point to the practical effect that it has on humanitarian aid by making overseas health organization choose between providing legal abortion services in their countries or receiving much-needed assistance for all sorts of reproductive health services, including contraceptives, prevention of sexually transmitted diseases (STIs) and maternal care. Critics also argue that the policy would be unconstitutional if applied to U.S.-based groups, because it curbs free speech.

Since 1965, the United States, through its Agency for International Development (USAID) has been the world’s leader in international family planning assistance. Over the past half-century, American funding and technical expertise have prevented millions of unwanted pregnancies and maternal deaths around the world. The U.S. spends more than $10 billion annually on global health — including $610 million specifically on reproductive health.

To determine the possible consequences of a reinstatement of the Mexico City Policy, researchers look to the data amassed during the last period that it was in place (2001-2009). During those years, many organizations and clinics in developing countries were forced to reduce services and staff, and some were forced to close their doors, restricting public access to family planning, STI services, and maternal and child health care.

Rather than reducing the abortion rate overseas, as proponents of the law had intended, the Mexico City Policy actually had the opposite effect. A 2011 Stanford University study found that abortion rates more than doubled in the Sub-Saharan African countries that were most reliant upon U.S. family planning aid during the years the Gag Rule was in place. In the absence of safe, reliable contraception, the abortion rate went up.

Several countries whose family planning assistance was severely cut have revised their population projections upward. Kenya is perhaps the most jarring example: before the Gag Rule, Kenya’s population in 2050 was projected to be 44 million. In the latest United Nations revision, however, that figure rose to 95 million. This example illustrates the time sensitive nature of compounding population growth. Each generation creates a larger base upon which the next generation grows.

President Trump’s version of the policy could be more expansive than in prior years. The original version of the Mexico City Policy was specifically limited to family planning aid disbursed by USAID. Trump’s memorandum calls for extending the rules to “global health assistance furnished by all departments or agencies.”

According to the Henry J. Kaiser Family Foundation, this would affect funding through the Department of State (which administers HIV-prevention funding), Department of Health and Human Services (which includes the Center for Disease Control and Prevention, the National Institutes of Health, the Food and Drug Administration and the HHS Office of Global Affairs), the Peace Corps, the Millennium Challenge Corporation and the Department of Defense.

It remains to be seen what the extent of the impact will be on health services in less developed countries if funding restrictions apply to all of these agencies. 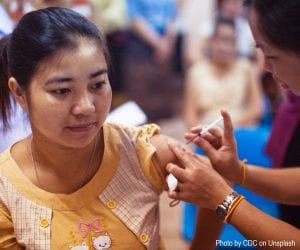 Representing different countries, students step forward or backward based on health conditions in their borders, to find which countries... Read More »