What is a Census?

A census is a procedure that acquires information about people in a given population, and the data collected impacts the design and implementation of policies and laws in governmental sectors including education, housing, transportation, health, and environmental protection. The census is also used as a tool to measure the effectiveness of past policies within these government realms. Aside from state and local government use, businesses can also use census data to assess markets and consumer demand to make decisions involving investments and new product development.

How the Census Began…

From a simple head count that only included measures of race, age, and sex conducted by 650 enumerators in 1790 to a decennial (every ten years) report that includes over 200 different surveys, facilitated by over 635,000 enumerators today, the census has changed throughout time in order to accurately and effectively measure the demographics of the American people. Today, the census includes surveys such as the Current Population Survey, the Survey of Income and Program Participation, and the American Housing Survey, covers more than 98% of commercial activity in the United States, and provides policy makers with demographic and economic characteristics of people living in the US.

Why is the Census Important?

Arguably, the most important role of the census is population apportionment. Apportionment determines how the 435 members of the House of Representatives will be divided among the states. Contrary to senators, of which every state has two, the number of representatives per state are determined solely based on population. Today, each member of the House represents roughly 700,000 constituents.

The census provides policy makers with accurate demographic information of their constituents so effective and representative policies may be enacted and federal assistance may be distributed. Each question on the census aids policymakers in the distribution of over $400 billion of funding for communities across the country. These policies can affect many aspects of citizen’s lives ranging from housing districts and one’s representative to allocations for highways, healthcare, hospitals, and schools. The allocation of funds can change dramatically based on population trends.

The census reports human population trends, a central focus of PopEd curricula. In order to create relevant materials to teach about population and human impact on natural resources, environmental quality, and human well-being, the Population Education programs relies on data supplied by the US census.

But all Americans, whether they know it or not, benefit from the census and indirectly rely on census data. We look forward to the 2020 Census!

How Many Fish in the Sea? 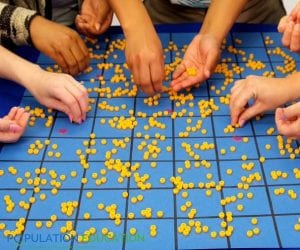 Students estimate a fish population (using goldfish crackers on a flat surface) by sampling. Students will be able to:... Read More »