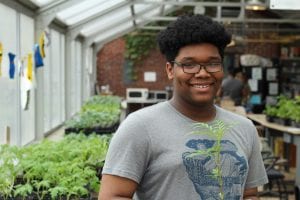 This student run business is a well-oiled machine, and Nathan points to the implementation of one key strategy as the catalyst to their highly successful programming – the use of data.

Using Data in the Garden 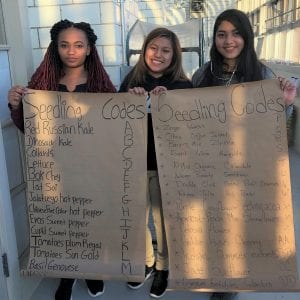 In the seedling program, Mighty Greens utilizes an alphanumeric data recording system to inform efficient business decisions. Nathan described the process to us in greater detail: as seeds are planted into growing trays, each specific plant variety is assigned a letter and each growing tray receives a unique number. By implementing this system, Mighty Greens can easily track how well plant varieties grow over time, and the consumer demand for those varieties in a given year. In the winter before seeds are planted, Mighty Greens analyzes the recorded data from previous seasons and tailors their growing strategy for the upcoming year.

In the spring, Mighty Greens hosts a series of “seedling sales” where the majority of their seedlings stock is sold. Mighty Greens members take home a portion of the remaining seedlings and distribute the rest to local organizations that serve marginalized communities.

This youth run business is an active player in the battle to improve food access. In addition to supporting its community, Mighty Greens also benefits its employees. Nathan does not take for granted the personal benefits he receives from his involvement in Mighty Greens, stating, “I now have a safe space to build friendships, be emotionally vulnerable, and have my voice heard.”

Why Mighty Greens Matters: Food Deserts in the Nation’s Capital

For some Washington D.C. residents, access to fresh food is hard to come by. There are only three grocery stores for the 150,000 people living in the city’s Ward 7 and Ward 8 neighborhoods. These Wards also have the lowest median household income and highest minority rates in the city. This is a stark difference to the nine grocery stores in Ward 3 alone, which by no coincidence, has the highest median household income and lowest minority rate. More than 80 percent of D.C.’s food deserts, areas with no or distant grocery stores, are in low-income minority neighborhoods. Lack of access to fresh food has dire health consequences for these low-income minority families, which consequently have higher rates of diet-related diseases.

At Population Education, we know the power youth have in effecting positive change. In our lesson, Getting Around (from the Energy unit of our high school curriculum), students create and conduct a survey to assess current transportation habits in their community. They analyze collected data to determine one local transportation issue that contributes to a reliance on fossil-fuel based transportation. Then, students develop a strategy that combats their identified transportation issue in order to make the community more sustainable. Educators can extend the lesson plan by empowering students to take action steps (for example; writing letters to local leaders, speaking with local organizations, creating a school transportation policy, etc.).

Whether it’s strategizing access to fresh food for their own neighborhood or developing a local commuter strategy for their city, let your students use data to be informed positive change-makers.

5 Inspiring Examples of Urban Gardens from Around the World

Part Three of the “Benefits of Urban Gardens” Series The world over knows the dire consequences of air and water... Read More »