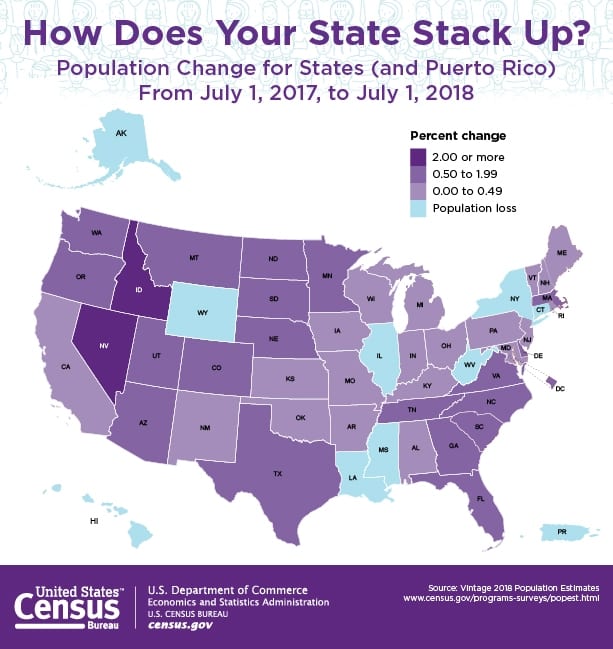 Cities’ Growth and Decline: Both Cause Stress

U.S. cities are emblematic of the diverse population shifts affecting people across the country. Many cities in the Midwest and Northeast continue to shrink with each year: Rockford, Illinois had a net loss of 10,000 people from 2010 to 2016, and has fallen from the second largest city in the state to the third largest. Similarly, Rochester, New York is no longer one of the top 100 most populous US cities after years of population decline. With fewer people comes fewer economic opportunities, which in turn makes these cities less attractive to migrants, which in turn spurs population loss.

At the same time, some U.S. cities are booming so quickly that local infrastructure can’t keep up. Austin, Texas is the fastest growing metropolitan area in the country, nearly doubling its population from 2000 to 2017. Accessible housing, however, has not kept pace with the influx of residents. As people spread further and further from the city center, population density decreases even as population grows, and existing problems with traffic and public transit worsen to the point that some Austin commutes may ultimately take as long as three hours.

Stress on Resources: Healthcare and Water

Nevada and Idaho have the United States’ highest rates of population growth and health care systems that are already struggling to meet the needs of their residents. In Nevada, every county in the state has a shortage of health care workers, and Idaho faces significant shortages for low-income and rural populations. As populations grow and a larger number of people grow older and consequently need more frequent and specialized healthcare, these shortages become more pronounced, reduce coverage for thousands of people, and contribute to escalating costs of treatment.

Similarly, water is crucial to supporting growing populations, but many communities are finding that their water supplies can’t keep up with an increasing number of people. St. Johns County, Florida has increased water use by 34% since 1997 due in part to the local population more than doubling, and local advocates worry that overuse of the local aquifer will exacerbate problems with groundwater contamination and coastal environmental problems. Colorado faces similar problems of overuse, with potential droughts making water conservation even more difficult.

As the global population rapidly changes, the ramifications of these changes will manifest in widely different ways across communities. Effective solutions to these problems will require understanding of local problems and tailored initiatives that meet the needs of specific communities.

Today’s big demographic news is cause for celebration – the CDC announced that teen birth rates in the United... Read More »