The Census Bureau recently released a report noting that in 2016, the U.S. population growth rate was 0.7%. To put that in context, the growth rate during the baby boom was 1.8% and the 2016 rate is the lowest we’ve seen since 1937 (that’s 80 years!). But knowing this fact alone doesn’t tell the whole story. Below are six demographic trends, in addition to our slowing growth, that are shaping the identity of the United States. These demographic changes not only impact our current economy and communities, but will continue to do so in the years to come.

1. Our national fertility rate was 1.9 children per woman. That’s below replacement level fertility of 2.1, but because the national birth rate (12/1,000) remains higher than the national death rate (8/1,000), our population is still growing, albeit slowly. In other words, more people are still being born in the U.S. each year than are passing away. 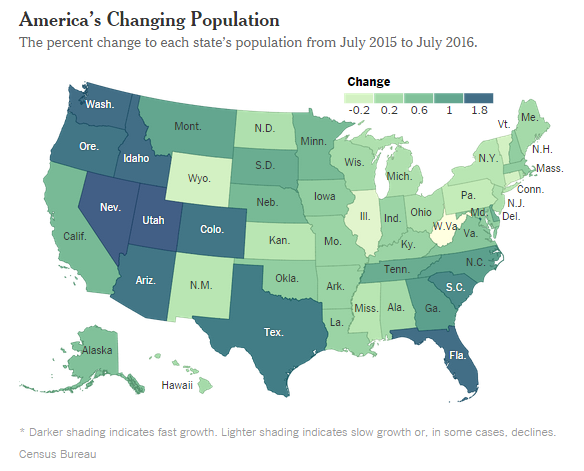 2. The population growth rate in the U.S. has been on the decline for years. It hovered around 1.2% in the 1990’s, 1% in the early 2000’s and has been just over 0.7% since 2010. This slowing trend is expected to continue, largely as a result of aging in the baby-boom generation, which will mean a higher death rate in years to come.

4. One of the clearest overall trends is that Americans are moving West and South. In fact, 7 out of the 10 fastest growing states are in the West. Census points out that growth in the south is most likely related to the aging of the baby boom generation, as they retire and head for warmer climates.

5. Nearly 40% of the U.S. population now lives in the South and about one-quarter of us live in the West.

6. Immigration is a big part of our American story. Immigration accounted for 45% of population growth in 2016, and in several states (Maryland, Massachusetts, and Rhode Island), made the difference between a shrinking population and a growing one. In 34 states, international arrivals outpaced domestic arrivals (people moving between states).

Stayed tuned for future posts that will explore each of these demographic trends in more detail.

Students create a population density map of the United States to visually represent how density has increased and how... Read More »