This is post 2 of 6 in a series about the Demographic Transition Model – a fundamental concept in population education, which is covered in Social Studies courses, most notably AP Human Geography.

Stage 1 of the Demographic Transition Model (DTM) is characterized by a low population growth rate due to a high birth rate (number of annual births per one thousand people) and a high death rate (number of annual deaths per one thousand people). In this first stage, total population is in flux as a result of these variables’ dynamic patterns, neither being consistent from year to year. Because the birth rate and death rate are relatively equal to one another there is little change in total population. But why are both rates high?

There are a number of factors that can influence a country towards a high birth rate and high death rate. Historically, high birth rates are attributed to societies that relied heavily on agricultural productivity or unskilled manual labor, because larger families meant a larger workforce.

A high birth rate is often the response to a high death rate as a country seeks to achieve or maintain replacement level (total fertility rate at 2.1 births per woman). Through a deeper analysis of circumstances that lead to high death rates, demographers often point to the rate of infant mortality and life expectancy as rubrics for determining a high or low death rate. Infant mortality is high when medicine and maternal care are limited or insufficient, and life expectancy is low when sanitation and public health are not adequate. Social, environmental, and political action all have severe consequences during this stage in regards to population because the birth rate and death rate are so fragile. 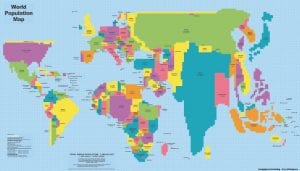 We are just a few weeks away from Geography Awareness Week (November 15-21). Sponsored by the National Geographic Society,... Read More »

Understanding Basic Demography: What is Birth Rate and Death Rate

There are two statistics that are fundamental in the study demography - birth rate and death rate. It is... Read More »