Last week along the Northeastern and Mid-Atlantic United States, offices, schools, dining rooms and Uber rides were consumed by conversation of the looming Winter Storm Jonas. As many Americans cleared grocery store shelves, purchased shovels and stocked up on batteries for flashlights, municipalities made similar preparations the best way they knew how, spreading salt on roads.

Why Salt on Roads?

Salt lowers the freezing point of water from 32 degrees Fahrenheit to 20 degrees Fahrenheit, reducing the amount of solid ice that can accumulate on roads. Joseph Stromberg of Smithsonian.com states that an “estimated 22 million tons of salt are scattered on the roads of the U.S. annually-about 137 pounds of salt for every American.” The use of salt is the most effective, cost-efficient melting material for icy or snow-covered roads, but it comes at a price.

As snow and ice melts on roads, it turns into storm water and picks up road salt as it makes its way into the surrounding watershed. This is an example of nonpoint source pollution, where pollutants enter the environment from many diffuse sources, rather than one specific location. As the United States becomes more urbanized, more roads are constructed, resulting in increased levels of pollution from salt. In a study cited by Stromberg, sodium and chloride levels were tracked from 1952-1998 in the Mohawk River in Upstate New York; “concentrations of sodium and chloride increased by 130 and 243 percent, respectively, with road salting the primary reason as the surrounding area became more developed. More recently, a study of a stream in southeastern New York State that was monitored from 1986 to 2005 found a similar pattern.”

Pollutants specific to road salt, sodium and chloride, can have a significant impact on our environment. Negative effects include a decrease in the survival rate of freshwater aquatic life, the increase in growth of salt-tolerant invasive species due to a lack of competition, the dehydration and death of trees and plants growing next to roadways, and the reduction of water circulation in lakes and ponds. So, how can we reduce our chloride footprint on the environment without prolonging our recovery time after a snowstorm?

Solutions to the Road Salt Issue

In an effort to find a sustainable yet effective balance, a combination of preemptive measures and technological advances are being implemented by transportation departments across the nation. A popular proactive technique being employed is called “anti-icing,” or spraying a salt solution on roads before a storm so that ice is unable to stick to road surfaces. This reduces the overall amount of salt required on roads in the first place. Some states are utilizing “smart plows” that can determine the optimal amount of salt needed on roads by using technology that considers storm conditions, pavement temperatures, and local weather, ensuring only as much salt as absolutely necessary is used. Elsewhere, salt mixtures that include sugarcane molasses, beet juice or cheese brine have been implemented, which reduce the overall amount of chloride in our waterways. In an interview conducted by NPR, a Wisconsin highway department manager raved about how effective mixing cheese brine, a virtually abundant resource, with road salt has been for his county. However, he did mention one drawback to the salt-cheese brine solution. “It has a slight odor when you handle the product. If you were behind a snow plow, you’d immediately smell it.”

Who Polluted the River? (Lower Elementary: K-2) – Students participate in an interactive story and experience the pollution of a local river over time. In large or small groups, they propose methods to protect the river from both current and future pollution mentioned throughout the story. 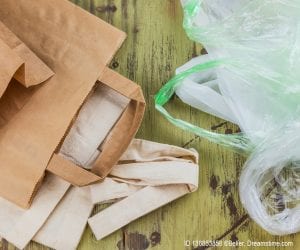 Students conduct research either in favor of or against plastic bag bans and taxes, then debate their assigned stance.... Read More »