The nation of Sudan has had a long history of conflict and civil war, uprooting millions and impeding development. Continuing conflict in the newly independent South Sudan has prevented further development, and essential services such as clean drinking water and sanitation are unavailable to many. In a talk given Wednesday afternoon in the Rayburn Senate Building in Washington, D.C., the founders of the humanitarian organizations Water for South Sudan and Aqua Africa, and a representative from the U.S. Agency for International Development (USAID) described South Sudan’s water situation and presented their groups’ efforts to improve it.

The organizations represented at the briefing are dedicated to providing access to clean water to the people of South Sudan and East Africa through the drilling of wells. In addition to the obvious benefits of clean water (improved sanitation, a decrease in waterborne illnesses), founders described how their efforts have positively impacted other aspects of development, such as women’s access to education and democracy. Anthony Kolb, USAID’s South Sudan Health Team member, said that investment in clean water in South Sudan has yielded excellent results with relatively little investment. The panelists called for further investment in South Sudan from both the United States government and its citizens.

It was inspiring to hear the panelists’ personal stories of using past tragedies in their lives as motivation to create something  worthwhile. Salva, founder of Water for South Sudan was born in South Sudan but fled as a refugee at 11 years old and ended up in the United States. Inspired by the death of his father caused by a waterborne disease, Salva returned to South Sudan in 2005, and through his newly formed organization drilled a well in the village where his father lived. Since then, this organization has drilled over 200 wells, providing over 100,000 people access to clean water. Buey shares a similar story. Nearly two decades ago, Buey fled Sudan to the United States with his family. After attending college, he founded Aqua Africa which since has drilled nine wells in South Sudan and has plans to expand through Eastern Africa.

A video from Water for South Sudan shows the water that people are forced to drink: brown, cloudy water taken from standing pools that some people (mostly women and girls) travel hours to access. It is moving to see the lives of the South Sudanese people improved through the efforts of these organizations and the donations of people here in the United States. However, with South Sudan’s current annual growth rate of 4.12%, the world’s 3rd highest the problem of limited access to clean water will grow more severe and other steps must be taken in this part of the world to see a truly sustainable solution.

Water Stress and Population Growth: The Story of the “American Nile ”

World Water Day will be observed on March 22nd and is meant to bring global awareness to the challenge... Read More » 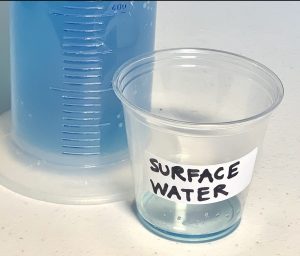 Students observe a brief demonstration on the distribution of the world’s water and then calculate how much water they... Read More »