A population pyramid, or age structure graph, is a simple graph that conveys the complex social narrative of a population through its shape. Demographers use these simple graphs to evaluate the extent of development for a given population – usually an individual nation – and to make predictions about the types of services that population will need e.g. schools, hospitals, homes, etc. And while every population pyramid is unique, most can be categorized into three prototypical shapes: expansive (young and growing), constrictive (elderly and shrinking), and stationary (little or no population growth). Let’s take a deeper dive into the trends these three shapes reveal about a population and its needs. Not a population pyramid pro? Read our refresher post first!

Constrictive population pyramids are used to describe populations that are elderly and shrinking. Constrictive pyramids can often look like beehives and typically have an inverted shape with the graph tapering in at the bottom. Constrictive pyramids have smaller percentages of people in the younger age cohorts and are typically characteristic of countries with higher levels of social and economic development, where access to quality education and health care is available to a large portion of the population.

Stationary, or near stationary, population pyramids are used to describe populations that are not growing. They are characterized by their rectangular shape, displaying somewhat equal percentages across age cohorts that taper off toward the top. These pyramids are often characteristic of developed nations, where birth rates are low and overall quality of life is high.

Power of the Pyramids 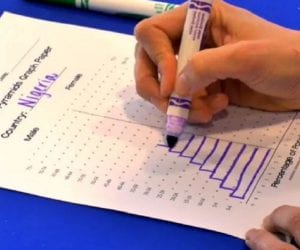