You’re almost certainly reading this on a phone, tablet, laptop, or desktop. Think back: do remember when you (or your school) first bought this device? If so, do you remember what happened to the old one?

What happens to these old electronic devices has become an urgent global concern, as technology consumption has soared and nations around the world grapple with the effects of mounting “e-waste.” With companies churning out new devices at breakneck speed, consuming and discarding obsolete tech gadgets is the norm. (The average smart phone user upgrades their phone after about 24 months.) 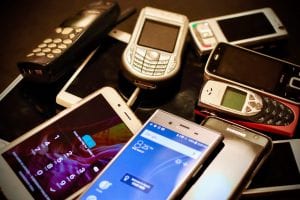 What is E-Waste and Why is it Dangerous?

“E-waste” or “electronic waste” is a broad term covering all discarded electronic devices that require batteries or electricity – from smartphones to refrigerators. While that sleek smartphone’s camera might take flattering portrait-mode selfies, the electronic parts inside can contain dangerous materials like mercury, bromine, and lead, which are hazardous when they end up in the wrong place once discarded – which is often. Unfortunately, only 20% of e-waste is recycled worldwide, with the remaining 80% thrown away and then incinerated or sent to landfills, or unaccounted for and likely dumped or traded. Hazardous chemicals from the wiring, batteries, and circuit boards can leak out and harm water, food supply chains, and people’s health, resulting in immune and reproductive system harm, and even cancer.

What Is The Scale of E-Waste?

The global economy generates about 50 million tons of e-waste each year, which, to put in perspective, is more mass than all commercial aircrafts ever produced. Half of this waste is from personal devices, like smartphones, computers, tablets and TVs. And e-waste is expected to rise, surging to more than 60 million tons by 2021. 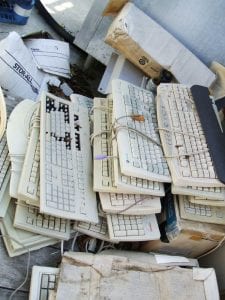 With only 20% of e-waste recycled worldwide, just increasing e-recycling might seem like a one-and-done solution. However, not all recycling programs send their e-waste to treatment facilities that prioritize human health and the environment.

After being collected for “recycling” in the U.S. or Europe, e-waste frequently ends up being shipped abroad to lower-income communities for locals to sort through and salvage. Once abroad, an informal network of workers trade or extract valuable materials from inside the devices, leaving the remaining parts to be burned or buried in unsafe ways. These discarded gadgets can cause considerable harm to people who break them down since there is often little oversight of worker health and environment impacts in the process. E-waste is especially hazardous to children who sort through the toxic technology, as their bodies absorb the chemicals at higher rates.

But it’s not all doom and gloom. The world has been working towards stricter international regulations, forming the Basel Convention in 1989, and just last year, securing enough country votes to give teeth to the BAN amendment which aims to curb the exporting of hazardous waste to other countries. (Unfortunately, the U.S. is only one of two countries, the other being Haiti, who have not ratified any part of the Basel Convention.)

Despite the U.S. government’s failure to ratify the Basel Convention and last year’s BAN amendment, places around the world are creating their own ways to increase responsible e-recycling, from Nigeria’s new “circular economy” program, to the E-Stewards Initiative which certifies and helps people locate responsible recycling programs.

Benefits of a Circular Economy on Addressing E-Waste

Aside from keeping dangerous chemicals out of landfills, responsible e-recycling has far-reaching social, economic, and environmental benefits. One rising solution, called upon by the UN and even enacted by new startups, is creating a “circular economy.” Since many tech devices contain precious metals like gold, silver, copper, and cobalt, safely extracting and re-using these raw materials can reduce our need to mine new ones from the Earth, thus reducing carbon dioxide emissions caused from mining. A decrease in mining can also help curb the human rights abuses and health problems inflicted upon the people who work in mines, as in the Democratic Republic of the Congo, which supplies over half the world’s cobalt, one of the main materials in cellphones.

How You Can Reduce E-Waste

1. Put a stop to overconsumption. Next time you see an ad for the latest and greatest tech, determine what exactly is drawing you to purchase a brand new device, other than “it’s new.” Ask yourself: Do I actually need that shiny new iPhone?

3. Just fix it. A lot e-waste ends up discarded because the owner thinks it’s forever broken. While it’s true that “planned obsolescence” is a consumer concern, oftentimes you might just need to do some quick investigation to easily repair your device. Check out iFixit, a website with a mission to reduce about e-waste, offering repair guides and videos for fixing many devices.

4. Advocate. Tell your elected officials what you want and ask them to support repair-friendly public policies.

How to Manage E-Waste Responsibly

5. Find a responsible e-recycler. Check out the E-Stewards Initiative website or the Consumer Technology Association’s zip-code locator to find certified recyclers in your area. 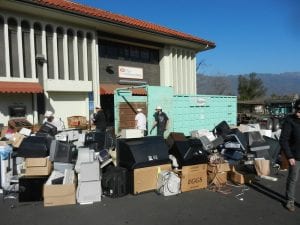 Taking a stand to not only reduce your own consumption of electronics, but finding responsible ways to manage e-waste are important personal steps to help curb this urgent global concern. Later this week we’ll talk about why you should introduce e-waste lessons to your high school class, and provide a case study to get you started! 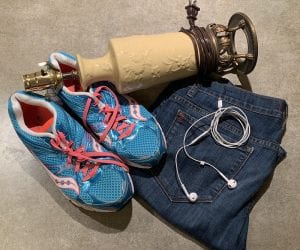 Students compare the life cycle stages of four everyday products in order to hypothesize which item has the lowest... Read More » 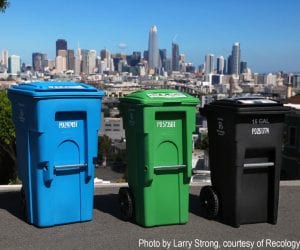 Solid waste case study reading: A profile of how a city is planning for zero-waste. Could this be replicated... Read More »