The rate of natural increase (RNI) is a measure of how quickly a population is growing or declining. However, the RNI does not factor in population change resulting from immigration or emigration – it is determined solely by the difference between birth and death rates in a region. To calculate the RNI, demographers subtract the death rate (number of deaths per 1,000 people/year) from the birth rate (number of birth per 1,000 people/year) and convert the answer to a percentage.

So Nicaragua’s rate of natural increase is 1.5%.

However it’s important to remember that this growth rate does NOT account for change based on migration, which can have a significant impact on a country’s overall rate of population change. 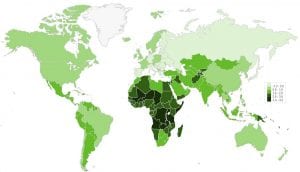 Rate of natural increase by country (2018)

Because RNI is based only on birth and death rates, it can be used to help determine a country’s stage within the Demographic Transition Model (DTM). Countries that are still developing often lack the social and medical infrastructure that tend to keep birth rates low, and thus often have a much higher birth rate than death rate. This results in a higher RNI indicating more rapid population growth. Countries with these demographic characteristics – higher birth rate than death rate leading to rapid population growth – fall into the earlier stages of the Demographic Transition model. Countries with lower birth rates, perhaps nearly equal to their death rates, have a lower RNI and fall into the later stages of the DTM.

RNI is also often used by government groups or aid associations like the World Health Organization to determine the effectiveness of certain programs and policies aimed at decreasing birth or death rates.

Ideas for Teaching RNI in the Classroom

Understanding RNI and how to calculate it is an essential part of demography and is important for students to consider as they grapple with the demographic challenges that lie ahead. What’s more, calculating RNI helps build math skills, while also applying learning to a real-world context. In our lesson plan Demographic Facts of Life (available in our Population Dynamics unit), high school students calculate RNI and the corresponding doubling time or half-life for several countries and explore factors that influence a country’s birth and death rates. 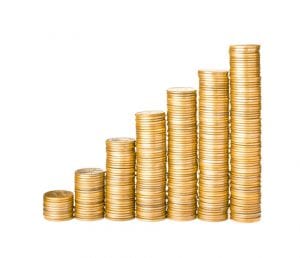 Students use mathematical formulas to calculate growth rates and doubling times, and to determine the difference between arithmetic and... Read More » 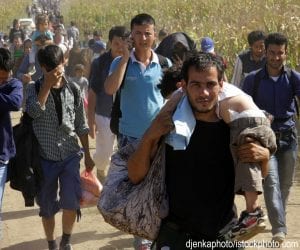