We’ve known for centuries that there are more boy babies born than girls. In the United States, 51 percent of all babies born are boys. But why? Until very recently, it was always assumed that the sex discrepancy happened at the time of conception. But a new, comprehensive study finds that just isn’t the case. The chance of conceiving a boy or girl is 50-50. It’s what happens during pregnancy that changes this ratio.

Researchers last week reported in the Proceedings of the National Academy of Sciences that, over the course of the pregnancy, there is a greater chance for a female embryo to miscarry than for a male embryo. This difference appears to vary according to the gestational stage – there is greater mortality for male embryos during the first week of pregnancy and during the third trimester. But over the course of the pregnancy, there is a slightly higher rate of female embryo mortality. Most of the data analyzed came from the U.S. and Canada, not countries like China where female fetuses are more likely to be aborted.

Students analyzing “population pyramids” for various countries may notice this difference between the number of young boys and girls (birth through age 4) when they are looking at the lowest bar on the pyramid. You can definitely see this in the country pyramids in our activity, Power of the Pyramids. As you move up the pyramid, the sex ratio evens out and women tend to live longer so there are more women than men represented at the top of the pyramid.

What is the Demographic Transition Model?

This is post 1 of 6 in a series about the Demographic Transition Model – a fundamental concept in... Read More »

How to Build a Population Pyramid in Excel: Step-by-Step Guide 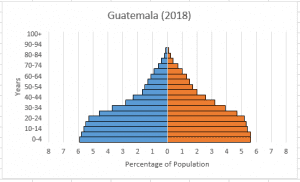 Making a population pyramid, or age-sex distribution graph, in Excel has never been easier than with this step-by-step guide... Read More »