As of the start of 2015, the U.S. Census Bureau puts the U.S. population at just over 320 million. This is up 0.73% from the beginning of 2014 meaning we’ve added an additional 2.3 million people during the past year. Yet while the total population grows, the rate at which it grows continues to decline, something that has happened every year since 2006.

For decades, the U.S. has been the fastest growing developed country in the world. So why are we seeing a slow-down in the population growth rate? The decline in the U.S. birth rate is responsible for much of this decrease. There are arguably numerous factors contributing to fewer babies being born but one seems to be given the most credence – the economic downturn in the late 2000s has caused women to delay pregnancy or in some cases, choose to not have children. And with a decline in births and a longer life expectancy, the population of the United States is becoming older. This shift in age structure can easily be seen by exploring population pyramids of the US. This GIF illustrates the progression.

The Great Recession had another demographic impact – a decline in immigration to the United States.  With a shortage of jobs in construction and manufacturing, fewer residents of Latin American countries sought to come to the U.S. This, coupled with stronger illegal immigration enforcement, led to an overall decline in immigration numbers in recent years.

The Westward Shift of U.S. Population

The U.S. population has changed dramatically over the past 200 years. Not only has our total population drastically grown... Read More » 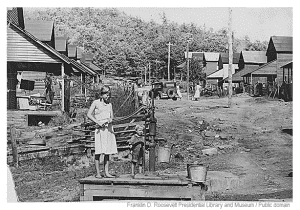