“For over 10,000 years, people lived in California, but the number of these people were never more than 300,000 or 400,000. Now we are embarked upon an experiment that no one has ever tried: 38 million people, with 32 million vehicles, living at the level of comfort that we all strive to attain.”

These were the words California governor, Jerry Brown, after announcing a required 25% cut in water consumption throughout the state last month. This drastic measure comes in response to the region’s severe four year drought, and will require governments, citizens, and businesses to reinvent the way they use water.

The article, “California Drought Tests History of Endless Growth,” from the New York Times last month, highlights the fact that California’s longstanding history of population and industrial growth is pushing the boundaries of nature. But Californians are rising to the challenge. The article points to Palm Springs as an example of how cities are changing their ways in an effort to deal with the drought and preserve precious water resources. The city has ordered a 50% cut in water use by city agencies and is embarking on a number of other water-saving measures – removing grassy medians between roadways, paying residents to replace their lawns with rocks and native plants, and offering rebates for residents who install low-flow toilets. A similar scene is playing out throughout the state, as Californians are encouraged to take shorter showers, forgo washing their cars, and find beauty in native desert landscapes as opposed to water-intensive lawns and flowers.

For now, the reduction requirements do not apply to the agricultural industry, which uses 80% of the state’s surface water. However, that’s not to say that farmers haven’t been effected. As fields have run dry, many farmers have found themselves unemployed, looking for work and increasingly dependent on food donations.

The challenges in California, not to mention other drought stricken regions in the U.S., remind us that water scarcity is a universal issue that often hits close to home. Unfortunately, with population continuing to grow and our global water supply remaining stable, water stress will only be exacerbated in the coming years.

The Population Education lesson, Water, Water Everywhere, addresses this issue by first visually depicting the small amount fresh water that is available for human use and then challenging students to track their own water use and research conservation technologies. Whether you’re experiencing drought conditions this summer or not, we encourage you to try this timely activity and send students off on summer vacation a-buzz with ideas for preserving water!

How Does pH-Level Affect the World’s Oceans?

If you’ve been to the beach this summer, odds are you spent your days splashing in the waves and... Read More » 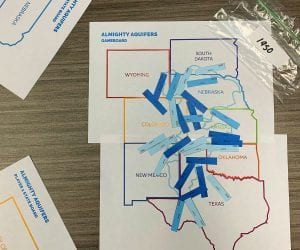