This is the third post in a three-part series on exponential growth, doubling time, and the rule of 70. This post makes the population connection by exploring the links between human population growth and environmental quality.

The concept of exponential population growth becomes a powerful teaching tool when we think about the implications it has on the health of our environmental systems. Simply put, the more people we add to our planet, the greater our collective environmental impact will be. The United Nations Population Fund (UNFPA) cites population and economic growth as the two major threats to environmental quality. A study published in Science on January 16, 2015 found that we have already crossed four of nine planetary boundaries as a result of human activity. The four are: climate change (atmospheric concentrations of CO2), loss of biosphere integrity (mass extinction), land-system change (deforestation), and biogeochemical cycles (phosphorous and nitrogen flows). 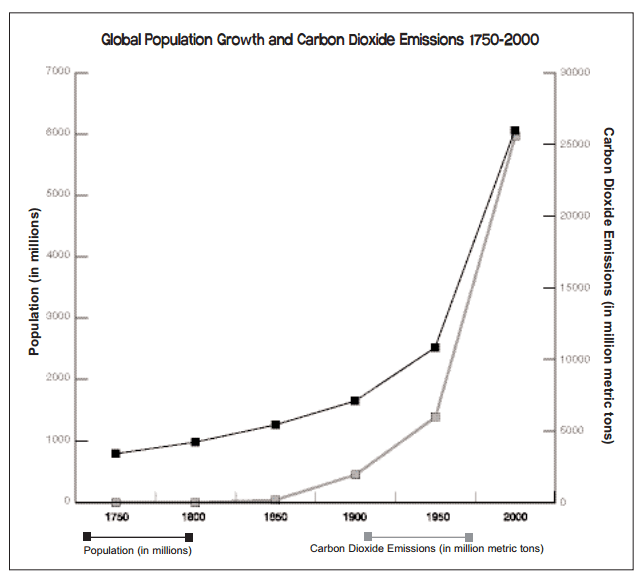 Let’s take a closer look at the relationship between population and climate change. Carbon dioxide emissions have increased significantly since the industrial revolution. Global CO2 emissions were 150 times higher in 2011 than they were in 1850. In less than 200 years, we have drastically altered the composition of our atmosphere. In 2014, CO2 concentrations surpassed 400 PPM, the highest levels found on earth in millions of years. If we were to graph CO2 emissions and population growth over time, we would observe a strong positive correlation between the two. Population dynamics, consumption patterns, and climate change are inextricably linked. Lester Brown, founder of the Earth Policy Institute and Worldwatch Institute, states, “If we cannot stabilize climate and if we cannot stabilize population, there is not an ecosystem on earth we can save.”

Fortunately, there are several steps we can take to address population growth. Improving women’s access to basic rights (health care, education, and economic opportunity) and voluntary family planning are ways to slow population growth through empowerment, not coercion. These efforts, in conjunction with strong commitments to reduce unsustainable practices, have the potential to improve the lives of millions of people and lessen our collective impact on the planet.

Explore Population Growth in Your Classroom

Population Education has a wealth of resources for exploring the impact of a growing population on the environment. We have selected three activities that relate specifically to this blog post.

Sometimes the terms “life span” and “life expectancy” are used interchangeably, but they have different meanings. So what is... Read More »