What is Climate Justice?

“Climate justice” examines how climate change is filtered through social problems to disproportionately affect those who neither caused the problem nor have the means to combat it. As our world’s temperatures keep rising, the intersections between social inequity and climate change will only continue to become more apparent.

February 20th is the annual UN World Day of Social Justice, so let’s take a closer look at the climate change-social justice link.

The Injustice of Disappearing Coastlines

For an example of climate injustice, take the tiny South Pacific island nation of Nauru. Though once rich in natural phosphate reserves, a century of colonial strip-mining left Nauru with a dilapidated environment – the the majority of land is now inhospitable, with residents pushed to the edges of the island. Sea water leeches into the already poisoned water table, further harming agriculture, and biodiversity plummets as coral reefs are bleached and ultimately killed by warming ocean waters. As sea levels rise, less and less land remains viable for human life.

Without the capability to combat these issues, Nauruans now face unprecedented levels of forced migration: ten percent of the population has already emigrated between 2005 and 2015, and forty percent expect that they will have to emigrate as a direct consequence of rising sea levels. The disappearance of land will have devastating consequences for the local economy and Nauruan cultural heritage—to say nothing of the uncertain conditions that migrants face when emigrating to a new country, or of the many Nauruans who don’t have the means to leave their remote island nation. Other South Pacific nations face equal or worse prospects. In Tuvalu and Kiribati, over 70 percent of the populations expect to migrate because of climate change.

Bangladesh is another example. Over 165 million people live in an area about the size of Illinois and rising sea levels threaten to entirely submerge a third of the country’s land mass. By 2050, the Bangladeshi government expects 30 million people to be displaced. This displacement disproportionately affects rural farmers, puts additional pressure on urban slums, and worsens rampant food instability across the country.

Climate Justice for All

For developing countries hit hardest by climate change, financial support from wealthy nations would go a long way to improving mitigation efforts and evening the scales of climate justice. Comprehensive action plans like the Paris Agreement outline the need for the international community to directly assist vulnerable nations who have had minimal input on climate change in the first place and may struggle to adapt.

The consequences of climate change become more intractable and pervasive with every passing day. Climate justice asks us to not just create sustainable innovations to fight the direct cause, but to fight for political, social, and economic policies that address the rippling effects throughout our social systems.

Addressing Displacement Due to Climate Change 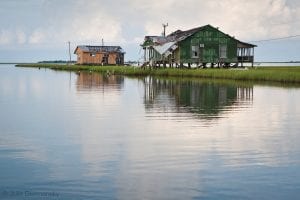 The impacts of climate change have ushered in a new classification of displaced people, known as climate refugees. Climate... Read More »